This statement in pdf format available here (English)
Esta declaración en formato pdf está disponible aquí (Español)
New human rights and fiscal justice initiative call on States to reform global corporate tax rules
New York, March 14, 2019—In response to a consultation opened by the Organization for Economic Cooperation and Development (OECD) on the tax challenges of digitalization, tax justice and human rights organizations in Latin America have joined efforts to demand radical changes to the rules of global taxation in order to stop tax avoidance and the race to the bottom in corporate tax rates.
The Initiative for Human Rights Principles and Guidelines in Fiscal Policy in Latin America – comprised of the Center for Economic and Social Rights, the Asociación Civil por la Igualdad y la Justicia (ACIJ); the Centro de Estudios de Derecho, Justicia y Sociedad (Dejusticia); the Centro de Estudios Legales y Sociales (CELS); Fundar (Centro de Análisis e Investigación); the Instituto de Estudos Socioeconômicos (INESC); and the Fiscal Justice Network of Latin America and the Caribbean (a collective of 21 tax justice organizations in the region) – stressed that the current global tax rules are not allowing developing countries to fulfill their obligation to mobilize the maximum of available resources for securing human rights and tackling inequality. In particular, the idea that multinationals should be treated as independent entities that carry out transactions at market prices for tax purposes (the “arm’s length principle”), as well as the test of physical presence within a State to allocate States’ taxing rights, have proven unfit for the 21st century. Therefore, it is necessary to look for both more suitable and fairer rules which benefit developing countries to a greater extent, and are more conducive to realizing human rights.
The document sent by the participating organizations to the OECD indicates that both corporate tax avoidance and the harmful race to the bottom on corporate taxes–including the proliferation of opaque tax incentives granted without serious cost-effective assessments—are depriving States of valuable resources for health, education and other key investments to meet the Sustainable Development Goals (SDGs). These practices also lead to a shift of the tax burden from multinational enterprises to small and medium enterprises, and to the rest of the population via indirect regressive taxes such as VAT, with a disproportionate impact on women and marginalized groups.
The submission coincides with the publication of a report by the International Monetary Fund estimating that developing countries are most affected by corporate base erosion and profit shifting practices to low tax jurisdictions, generating losses of 1.3% of GDP for non-OECD countries.
The document sent by the Initiative calls on the OECD to conduct an evaluation of alternative proposals in light of their impact on developing States’ ability to mobilize adequate resources to realize human rights. It also encourages States to act in accord with human rights obligations in negotiations within the OECD and other multilateral fora. These obligations impose basic demands of justice such as the need to create rules to protect and expand the policy space for low- and middle-income countries to mobilize resources through corporate taxation and adopt redistributive policies.
The document supports the proposal made by ICRICT that says multinationals should pay taxes as single, unified companies, under a simple formulaic approach ensuring that taxing rights are allocated according to objective factors. Combined with the establishment of a minimum effective corporate tax rate and other tax cooperation mechanisms, these reforms would constitute a crucial step towards fixing the failures of the current system.
The Initiative will continue advocating for human rights-based fiscal policies as well as contributing to civil society efforts to achieve the reforms required at the global level.
The submission to the OECD is publicly available in English and Spanish. 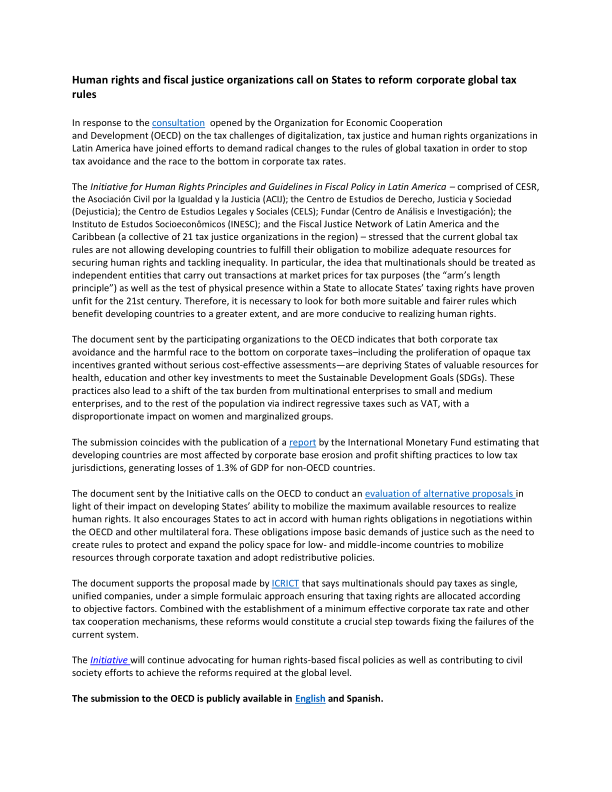 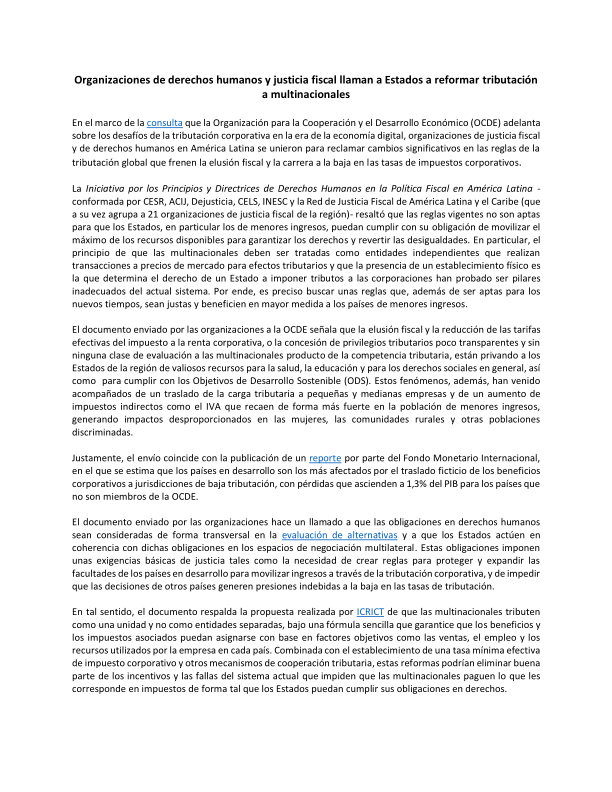