Linking Fiscal and Environmental Justice Agendas in the Andean Region

Esta noticia de blog está disponible en español
Accompanying video in Spanish with English subtitles available here
Linking Fiscal and Environmental Justice Agendas in the Andean Region:
The Rights of Indigenous Peoples and Afro-descendant Communities Both Affected by Extractive Industries
On April 9-10, 2019 in Bogotá, CESR and Colombian nonprofit Akubadaura organized a workshop with Indigenous and Afro-descendant leaders from the Andean Region to discuss the links between fiscal injustice and environmental injustice caused by extractivism and how these affect the rights and wellbeing of their communities.
“Talking about the issues of resources and economic power may cost us our lives, but so may keeping silent.”
--Sofía Garzón, Afro-descendant leader and member of the Proceso de Comunidades Negras (PCN)

In the Andean Region—an area marked by a development model overwhelmingly dependent on extractive industries—environmental, socioeconomic and fiscal injustices mutually reinforce each other, disproportionally affecting the rights and wellbeing of Indigenous peoples and Afro-descendant communities living in those areas undergoing intensive natural resource exploitation. 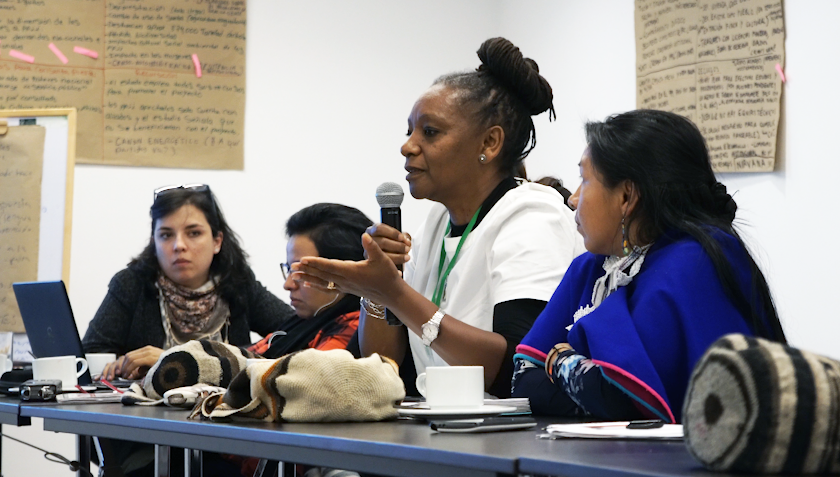 For example, transnational and national companies that exploit natural resources and cause environmental damage—endangering the lives and health of populations in resource-rich areas—are often the same that benefit from tax incentives and frequently engage in abusive tax practices.  These fiscal privileges given to extractive industries deprive States of much-needed resources that could be used to protect communities from the impacts of extractive industries or might allow them to invest in securing their own rights. As a result, Indigenous peoples, Afro-descendant communities and other rural communities see their territories plundered and their economic and social rights ignored.
In working to confront this multiple threat to communities’ very survival, human rights and Indigenous rights organizations in the Andean Region, such as Akubadaura, are seeking a holistic and strategic approach that unites the fight for sustainable natural resources with the struggle for fiscal justice.  In doing so, the participation and voices of the affected communities are essential to defining such strategies.
To address the issue, CESR joined the Akubadaura Community of Legal Experts in organizing a landmark workshop in Bogotá in April,  gathering together fifteen Indigenous leaders and leaders of African descent from various regions of Peru and Colombia. The workshop sought to discuss and distill the impact of current fiscal and natural resource management policies on the human rights of these communities, and to jointly identify conceptual and methodological tools to support and operationalize a common agenda for environmental and fiscal justice.
During the discussions, leader Sofía Garzón, from Proceso de Comunidades Negras, a network of Afro-Colombian organizations, presciently remarked that “talking about the issue of resources and economic power may cost us our lives, but so may keeping silent.”  In fact, on May 4 in Cauca Department, Sofía and other leaders, including Francia Márquez, winner of the 2018 Goldman Prize for defending rural territories against the environmental impact of mega-mining and illegal mining, were attacked by armed men. Fortunately, Sofía and her companions were unhurt.
Indigenous leaders in Latin America, and in the Andean Region in particular, run enormous risks defending their territories. In Latin America, the  Tierra de Resistentes (Land of Resistance Fighters) project has counted more than 1,536 acts of violence against environmental leaders and their communities in the last ten years. In Colombia, from 2016, when the Peace Agreement was signed, until January 2019,  the Defensoría del Pueblo (National Ombudsman Office) estimates that more than 460 human rights leaders and defenders have been killed.
In spite of this harsh reality, Indigenous and Afro-descendant leaders assert that silence is not an option, as the issue at stake is their physical and cultural survival. Throughout the workshop, participants denounced States making decisions about the distribution of natural and financial resources without their participation and ignoring the experiences of the ethnic communities affected. They stressed that the negative impacts of these policies on the rights of such communities and their territories were overwhelming. They also pointed out that even the well-recognized obligation of free, prior and informed consent on matters concerning their rights is often ignored. Consequently, all in attendance agreed that the application of an ethnic and racial justice lens to fiscal and natural resource exploitation policymaking is not only necessary but urgently needed, in order to demand reforms and claim socioeconomic rights. 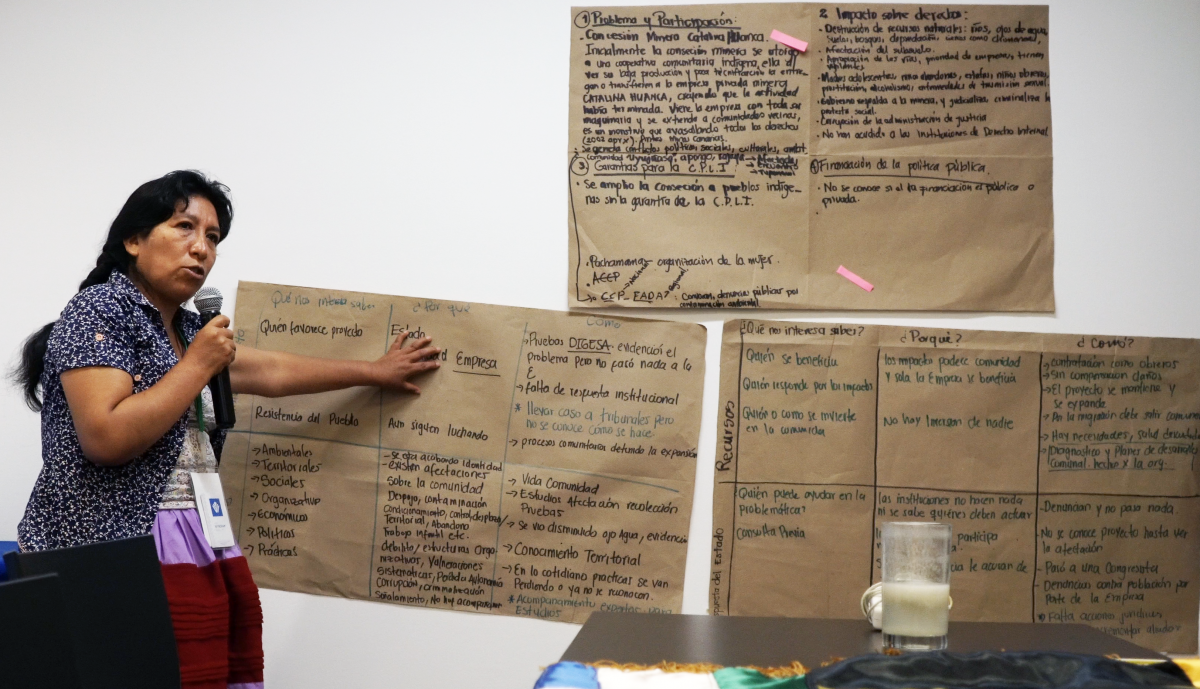 In addition to reflecting on the intersections between fiscal policy and natural resources from the perspective and experiences of these communities, a substantive part of the workshop was dedicated to analyzing human rights concepts and methods for public policy monitoring, with CESR’s OPERA framework included.  The purpose was to identify the potential for these tools to assess the economic and social rights impacts of fiscal and environmental policies from an ethnic and racial justice lens. Participants acknowledged the importance of a policy monitoring framework that supports their efforts to connect fiscal policy concerns to their struggles against extractivism.
The following are key issues arising from the workshop debates:
• Despite the fact that Indigenous and Afro-descendant communities bear the heaviest costs of natural resource exploitation in the Andean Region, they have been excluded from decision-making on tax incentives and distribution of fiscal resources generated by these activities.
• More documentation is needed of the impacts that unjust tax policies benefiting extractive industries have on people’s economic, social, cultural and environmental rights; in particular, of the impacts on Indigenous and Afro-descendant communities.
• The rhetoric that portrays affected communities as forces opposing economic growth and development must be confronted. It is important to raise awareness of the huge contributions these communities make to their countries’ economy through their production of food, care of forests and other ecosystems, protection of biodiversity and preservation of linguistic heritage and cultural diversity.
• Any fiscal policy approach that takes into account the interests of Indigenous and Afro-descendant communities must aim at strengthening their local economies, preserving their identities and ways of life; and not necessarily focusing on obtaining subsidies and other benefits from the State. Blandina Contreras, member of the Coordinadora Andina de Organizaciones Indigenas and President of OMUCAI Pachamama in Peru, said: “Nobody has given us anything.  We ourselves achieved what little we have. What we have obtained, we have achieved after centuries of struggle.”
• Current fiscal policymaking in most countries in the region lacks an ethnic and racial justice perspective. It’s critical to change this situation in two ways.  “We need to operate on a dual front. […] This means seeking changes at the institutional level but also strengthening communities,” said Cecilia Ramírez of the Centro de Desarrollo de la Mujer Negra Peruana.
• In order to fully defend their wellbeing and their territories, affected communities need to have access to information and theoretical and practical tools to articulate their claims and participate in decisionmaking.  Decisions on what investments will be made in their lands—or how budgets should be distributed—are being made by national authorities in ways that are neither transparent nor participatory.
• Forming alliances with a diverse set of players and social movements is crucial, as is the sharing of tools available for a comprehensive understanding of the adverse circumstances imposed by the extractivist model. 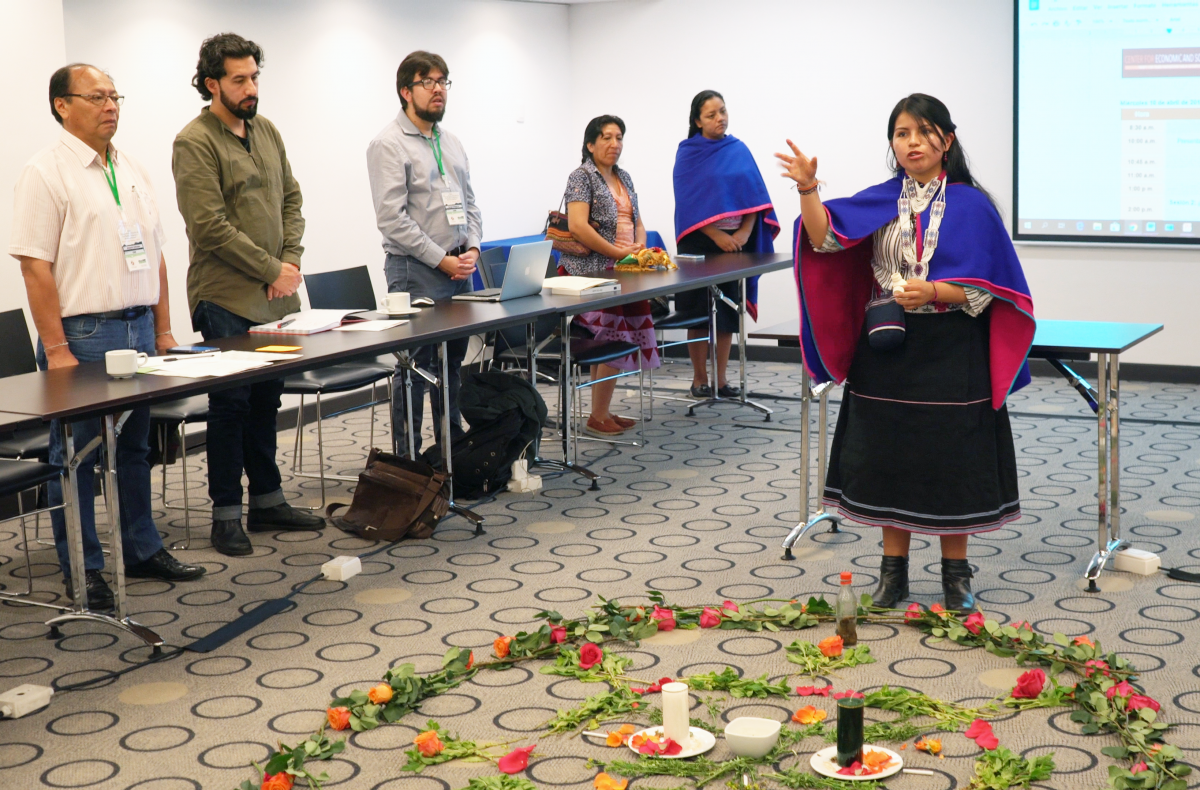 The Bogotá workshop was the first step in an ongoing process seeking to strengthen collaborative efforts to fight fiscal injustice in the context of extractive industries.  Working together with Indigenous and Afro-descendant organizations, this initiative supported by the Andean Region Office of the Ford Foundation aims to make tools available for these communities to monitor economic and fiscal policies and claim their rights more effectively.
“These instruments need to be informed by ethnicity as a key approach so that communities are empowered to adopt them and monitor fiscal policy and budgets” said Marcela Tobón Yagarí, Director of Akubadaura.
All photos by Luke Holland @Assume_Media
Related:
Fiscal Policies and the Safeguarding of Economic, Social and Cultural Rights in Latin America
The State of Tax in Latin America: Massive Evasion and Avoidance Block Human Rights and Development
Towards human rights-based fiscal policies: Principles and Guidelines for Latin America and the Caribbean
Andean Region: Towards a New Fiscal Reform Agenda for Equality and Rights
To top
Back to top