Europe moves forward on Robin Hood Tax while US balks

Europe’s much talked-about financial transactions tax has come one step closer after a coalition of 11 countries – including France, Germany, Italy and Spain – agreed to move ahead with the initiative despite the opposition of several other states. A number of countries, such as Britain and Sweden, remain opposed to the ‘FTT’, but at a meeting of European Union finance ministers on Tuesday its proponents decided to avail of the EU’s ‘enhanced cooperation’ facility, thereby clearing the way for officials to begin designing the mechanism. 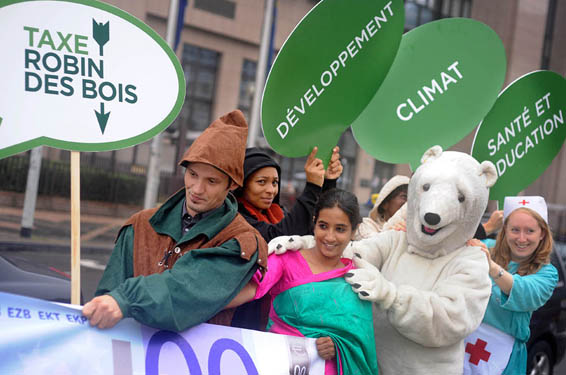 Much work remains to be done if the FTT is eventually to become a more widespread reality, however, as certain key states remain reticent. Indeed representatives of the world’s largest economy have been accused to trying to convince other countries not to go ahead with it. In a joint letter to US Secretary of State Hillary Clinton and Secretary of the Treasury Tim Geithner, CESR joined a large group of US civil society organizations such as ActionAid, Friends of the Earth US, Grassroots Global Justice Alliance, National Nurses United and Tax Justice Network USA to call on the US government to stop discouraging other nations from considering an FTT. The letter was issued after a US official made misleading statements, insisting that the FTT was not feasible. Paul Bodnar—a  member of the US climate negotiating team—argued at a recent UN meeting on climate change financing that it would be all but impossible to implement the FTT globally, and that financial traders would find ways to circumvent it anyway. He also affirmed that finance for climate change mitigation — one of they central motivations cited by those advocating for the FTT – should be directly linked to emissions. His arguments are rebuffed in the joint letter, which was signed by some 63 civil society organizations. Such taxes do not have to be global to be effective, as demonstrated by the fact that they are already up and running in many countries, and international financial transactions are actually relatively easy to monitor. The idea that a tax must be directly linked to the source of taxation, meanwhile, is patently erroneous. The weight of the civil society initiative, led by Friends of the Earth, was reflected in extensive media coverage as influentia institutions such as Bloomberg reported on the letter.

Civil society has also targetted World Bank President Jim Yong Kim in a joint letter, calling on him to use his position to champion the ‘Robin Hood Tax’, as it has come to be known. CESR added its voice to that of 57 other organizations by signing the communiqué, which provided yet more evidence of the growing civil socity consensus on the practicality and importance of the FTT. The viability of the financial transaction tax is further underlined by the backing it has received from many prominent economists and political actors. Support from leading business figures like Bill Gates and Warren Buffett is mirrored in the endorsement of political and diplomatic leaders such as Kofi Annan, Al Gore and even IMF boss Christine Lagarde.

In a time when multiple crises are exacting a devastating toll on the wellbeing of ordinary people everywhere, political leaders would also do well to remember the human rights principles underpinning calls for the financial transactions tax. The measure would go some way to integrate a modicum of equality and progressivity into a system where these are sorely lacking. Keeping in mind the role high-frequency trading has played in provoking the food and fuel crises, not to mention ongoing economic quagmire in which the world finds itself, the FTT could also help in preventing human rights abuses by third parties, as is required by international human rights law.

But perhaps most obviously, the FTT is precisely the kind of common-sense measure that would help governments comply with their obligation to mobilise the “maximum of available resources” for the protection of economic and social rights. It is estimated that the European FTT could raise in excess of €57 billion (US $75 billion) a year for the protection economic and social rights, while an FTT rolled out across the G20 group of nations could mobilise in excess of $250 billion.