CESR, in cooperation with the Multidisciplinary Group on Sexual and Reproductive Rights of Guatemala and Planned Parenthood Federation of America, presented a submission to the Human Rights Committee on July 30 about health and economic issues affecting women in Guatemala. These challenges are intrinsically connected to rights protected by the International Convention on Civil and Political Rights (ICCPR).

Guatemala will appear before the 100th session of the UN Human Rights Committee, which takes place October 11 to 29. The Committee will examine Guatemala's third periodic report on the implementation of the ICCPR.

Drawing on the 'Rights and Privileges' report published in 2009 jointly by CESR and Instituto Centroamericano de Estudios Fiscales, the submission highlights that although Guatemala has one of the strongest economies in Central America, poverty and inequality are uncharacteristically high. This especially so among women, whose right to life and equality have failed to be protected. Guatemala has one of the highest rates of maternal mortality in Latin America, with 290 deaths per 100,000 live births. Indigenous women are the most severely affected by pregnancy related deaths. They are three times more likely to die during pregnancy or childbirth. Rural areas, which are generally more populated by indigenous communities, are also disproportionately affected by maternal health

The submission also highlights the government's failure to address the serious issues of illegal and unsafe abortions and limited access to reproductive health services, family planning and contraception. Unmet contraceptive need is particularly high in Guatemala. In rural areas it is 25.4% and 29.6% among indigenous women, while in urban areas it is 14.7% and 15.1% among non-indigenous women. It is not surprising that Guatemala has the highest fertility rate in Latin America and one of the highest adolescent pregnancy rates in the region.

This submission hopes to contribute to the Human Rights Committee's work on ensuring that Guatemala protect and respect civil and political rights of all women within the country. 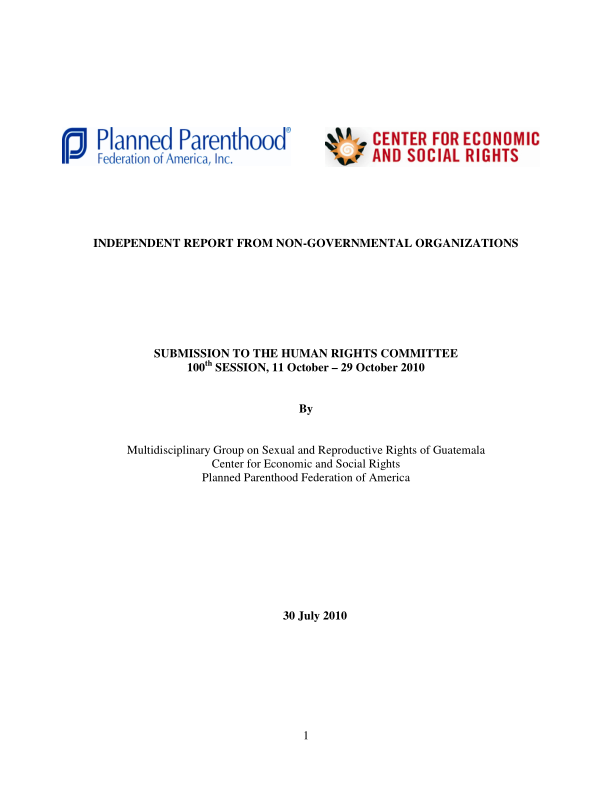