Austerity and retrogression: Have governments got the right?

Madrid/Barcelona: The latest gathering of EU leaders in Brussels may have far-reaching consequences for the human rights of ordinary people. A new fiscal compact, demanding the fiscal deficit caps be enshrined in national constitutions, effectively illegalizes more expansionary policies that might reinvigorate economies while also safeguarding the economic and social rights of vulnerable sectors. Despite recognition of the desperate levels of unemployment now besieging communities all around Europe, the latest efforts to shore up the European political project are likely to further undermine the wellbeing of poorer families.

Nowhere are the dangers of the austerity trap more evident than in Spain, where cutbacks to social spending are leading to stark retrogressions in economic and social rights. With this situation in mind CESR, along with two of its key allies, has called on Spain’s new leader to ensure human rights are respected in economic recovery measures. Together with Amnesty International Spain and the Barcelona-based human rights network Observatori DESC, CESR has sent a letter to Prime Minister Mariano Rajoy reminding him that basic human rights do not become “optional” in the context of economic crisis.

Just as unemployment figures hit record highs, many thousands of families face increasing deprivation, and the need to protect economic and social rights is more urgent than ever, the drive for further austerity measures and cutbacks in health and education spending are hindering the wellbeing of vulnerable sectors of the Spanish population. More than 42,200 families faced eviction as a result of finding themselves unable to pay mortgages or rent in the first nine months of 2011.

The new EU fiscal compact follows the example set by Spain in August 2011, when it placed a cap of its budget deficit in a bid to satiate the demands of the markets, which had become skittish about its national debt. “No global economic and financial crisis diminishes the responsibility of state authorities and the international community with regard to human rights,” affirmed the United Nations Human Rights Council in 2009. So far this warning appears to have had limited impact in the Moncloa, or indeed Brussels, however.

“The protection of human rights is not a matter of choice in designing and implementing measures aimed at ‘economic recovery’,” emphasized Ignacio Saiz, Director of the Center for Economic and Social Rights. “The Spanish Constitution recognizes social rights, such as the right to health or the right to housing, as guiding principles for economic and social policy, while education is recognized as a fundamental right. Therefore, no measure applied to limit the public deficit can put these rights at risk.”  In this regard, it must also be noted that the 2011 constitutional reform established that limits on public debt could be surpassed in cases of economic recession or situations of extraordinary emergency which considerably prejudiced the financial situation or economic or social sustainability.

In the letter, CESR, Amnesty and El Observatori DESC reminded the Prime Minister that, in ratifying the International Covenant on Economic, Social and Cultural Rights, Spain committed to using the “maximum available resources” for the progressive realization and non-retrogression in achieving full enjoyment of economic, social and cultural rights. These principles oblige Spain to ensure, that everything possible has been done to guarantee these rights, dedicating maximum available resources to this end, including during times of serious limitations in economic resources. They also mandate that States must provide special protection for people who belong to vulnerable groups or find themselves in situations of vulnerabiliy or discrimination, as may be the case for women heads of households, migrant workers and children. States are also obliged to carry out an assessment of the possible impacts of reductions in public spending on these sectors, ensuring prior to implementation that economic recovery measures do not worsen the situation further.

“Access to a dignified life, the possibility of enjoying the maximum attainable level of health, along with access to quality education are human rights which Spain has the obligation to guarantee,” said Esteban Beltrán, Director of Amnesty International Spain. “This must be taken in account when designing any measure to be implemented in response to the current economic crisis.”

Furthermore, before embarking on austerity measures and social spending  cutbacks, states must demonstrate that an exhaustive examination of all alternatives has been undertaken. Such measures should always be considered a last resort. In this regard, The UN Committee on Economic, Social and Cultural Rights, which monitors compliance with ICESCR, has emphasized a strong presumption that regressive measures are not allowable.

It is also fundamental that respect for human rights be taken into account not only in laws or measures to be implemented, but also in the decision-making process. “In this regard we request that the government fully explain, in a manner that is easily-understandable to ordinary citizens, the measures that are proposed, while also establishing mechanisms for participation. In this way, it would meet its obligation to respect the right to participate in public life, and to collect and provide information to the citizenry,” explained Vanesa Valiño, Director of Observatori DESC.

Despite the fact that structures for the fulfillment of economic and social rights are broadly decentralized in Spain, CESR, Amnesty and El Observatori further reminded Prime Minister Rajoy that the Committee for Economic, Social and Cultural Rights has called on the Spanish state to take measures guaranteeing these rights for all people in its whole territory.

In May 2012, for the first time in eight years, Spain will appear before the Committee for Economic, Social and Cultural Rights at the United Nations to report on how it has complied with the obligations undertaken when it ratified ICESCR. This will be an opportunity for the Spanish state to explain whether measures implemented in response to the crisis have taken the aforementioned obligations into account.

The letter sent to Prime Minister Rajoy can be accessed below in pdf format (in Spanish). For more information, please contact: Luke Holland. Email: lholland@cesr.org. Telephone: 91 448 39 71 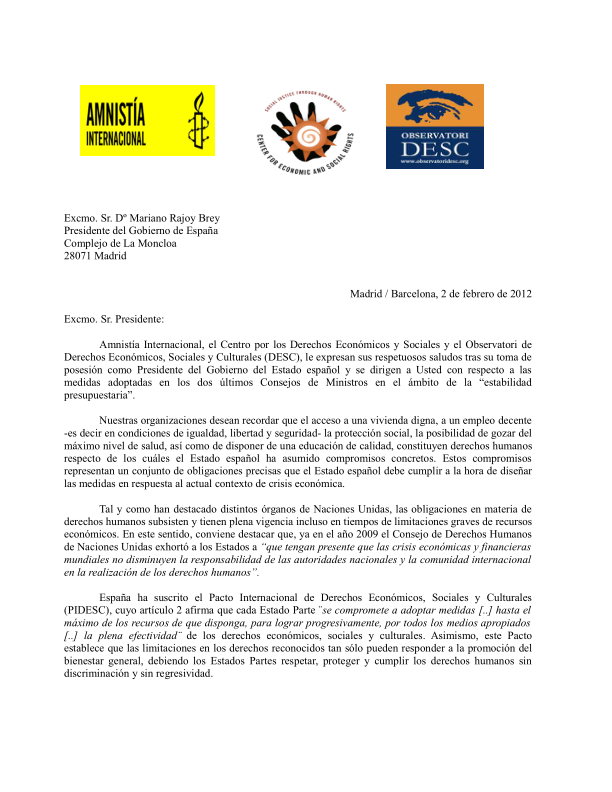