Will the IMF align with human rights and fiscal justice after COVID-19? Lessons from Latin America and the Caribbean 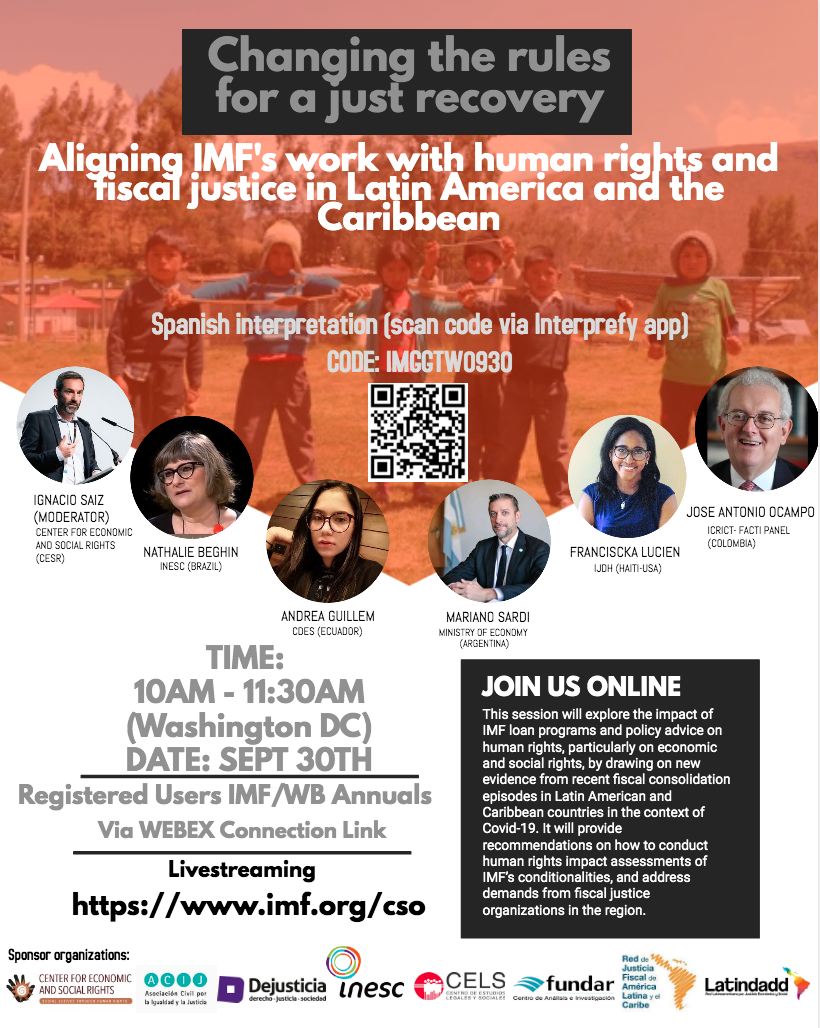 The International Monetary Fund’s (IMF) Managing Director, Kristalina Georgieva, stated earlier this year that "...this is the time to do all it takes to support those most affected by the crisis". She further called for “...solidarity with the most vulnerable people and with the most vulnerable countries”, and noted the importance of landing “...on the other side of this crisis with an economy that is more resilient, greener, smarter, and fairer.” While these remarks are welcome, an analysis of the IMF’s role in countries across Latin America and the Caribbean shows the need to question the action behind the rhetoric. Concrete measures are needed to expand fiscal space beyond times of emergency, and avoid returning to recurrent austerity measures that undermine States’ capacity to fulfil their human rights obligations. And yet, there is increasing evidence that IMF advice and conditions are pushing in the opposite direction.

With the aim of discussing ways to pursue these goals, CESR co-organized an event at the Civil Society Policy Forum of the 2020 World Bank Group and IMF Annual Meetings. The event, "Changing the rules for a just recovery: aligning IMF’s work with fiscal justice and human rights in LAC", was sponsored by the 7 civil society organizations that make up the Initiative on Human Rights in Fiscal Policy, as well as Latindadd and Red de Justicia Fiscal de América Latina y el Caribe.

In introducing the discussion as chair, CESR’s Executive Director Ignacio Saiz highlighted the importance of expansionary, redistributive and accountable fiscal policy in order to safeguard human rights in response to the COVID-19 pandemic. In this context, the IMF’s dogmatic insistence on fiscal consolidation was particularly alarming. Panelists spoke to the human rights implications of this in practice, drawing from both national and international experiences.

Nathalie Beghin (INESC, Brazil, representing several coalitions including Red de Justicia Fiscal de América Latina y el Caribe, Latindadd and the above-mentioned Initiative for Human Rights in Fiscal Policy) noted that fiscal policy’s main goal should be the realization of human rights. However, elites in the region have developed a false narrative around fiscal policy focused on reducing “excessive” public spending, aided and abetted by the IMF. As a consequence, she argued that fiscal policies in the region are “sexist, racist, and work against the poor”. For instance, austerity measures in Brazil, which were vocally supported by the IMF, disproportionately affected already disadvantaged people.

Andrea Guillem (Centro por los Derechos Económicos y Sociales, Ecuador) explained that Ecuador’s sustained period of economic growth, poverty reduction and reduced unemployment ended after austerity measures proposed by the IMF were put in place in 2018. Measures were taken with no previous consultation, triggering social unrest, and deepening the structural conditions affecting disadvantaged groups. She argued that, to reverse these trends, increased dialogue with community and civil society stakeholders and protecting access to basic services are essential. Notably, when the IMF recently announcedit had reached an agreement with Ecuador on a New Extended Fund Facility, it claimed it would “...support Ecuador’s policies to expand the coverage of social assistance programs, protect the vulnerable segments of the population, ensure fiscal and debt sustainability, and strengthen domestic institutions...”. And yet, this is difficult to square with the simultaneous demands for fiscal contraction and deficit reduction.

Mariano Sardi from the Ministry of the Economy of Argentina stressed the importance of the principles of good faith and sustainability regarding foreign debt restructuring, drawing on the country’s recent experience of negotiations with its creditors. He also discussed the “right to financial inclusion”, noting how effective access to affordable and non-discriminatory financial services was key to pursue the SDGs, eliminate extreme poverty, promote gender equality and secure the right to an adequate standard of living.

Franciscka Lucien (Institute for Justice and Democracy, Haiti) discussed the impact of the IMF’s programs in Haiti, which brought about dramatic cuts in social spending leading to a cycle of dependence on foreign assistance and aid. She argued that the pandemic represents a wake-up call, making evident the consequences of structural adjustment. In fact, the best thing that the IMF can do for social stability and prosperity is protecting States’ capacity to invest in social sectors, she argued.

In concluding, Ignacio remarked that the presentations showed that the IMF has a long way to go to close the gap between rhetoric and practice, especially in the context of the current crisis. Unfortunately, the IMF had not made a member of staff available to participate in the discussion, despite the organizers’ best efforts. He therefore asked participants to close the event by putting forth some concrete recommendations that could be transmitted to the IMF following the meeting. These included:

Participants noted their disappointment at the absence of IMF representatives at a forum expressly designed to encourage dialogue between IMF staff and civil society. However, the participating civil society organizations are eager to continue to build a constructive dialogue with the Fund on the human rights implications of fiscal policy - an issue that pertains to everyone and can no longer be considered beyond its mandate. As CESR’s Ignacio Saiz stated in his closing words directed at the Fund, "If your work affects human beings, then your work concerns human rights".

The recording of the event is available here (scroll to sixth clip).