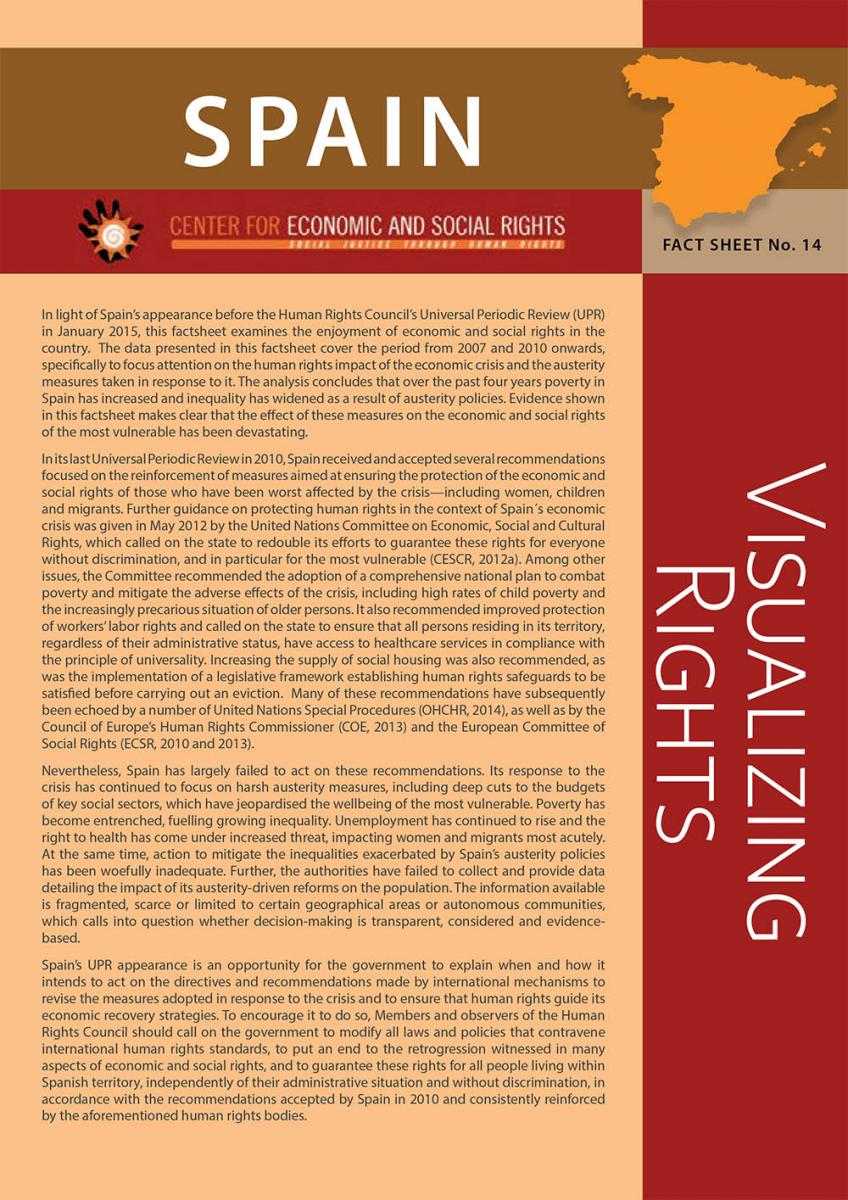 As Spain faces a major UN review of its human rights record, a new factsheet by CESR illustrates how four years of austerity have driven rising poverty, deepening inequality and a serious deterioration in a variety of economic and social rights in the country.

Published on the occasion of Spain's appearance before the Human Rights Council's Universal Periodic Review (UPR) mechanism in January 2015, CESR's rigorous analysis of statistical data from the past four years demonstrates that, despite repeated calls from the United Nations and European human rights bodies, Spain has continued with the implementation of harsh budget cuts and other austerity-driven reforms that are depriving people already vulnerable to the effects of the economic crisis of their basic human rights.

CESR's factsheet makes evident that over four years of historic budget cuts have severely undermined social services. Almost 13 million people are facing poverty and social exclusion in Spain, some 3 million more than in 2007. A quarter of children are at risk of malnutrition, and economic inequality is deepening wider and faster than in other European countries, with Spain now one of the most unequal countries in the region.  A quarter of the active population - and more than half of those under 25 - is unemployed. Long-term unemployment (2.4 million people) and increasing wage precarity (44% of the population) are meanwhile becoming chronic features of the economic landscape, with many people losing access to unemployment benefits and other social protection measures after two years without work.  Women's rights to life and physical integrity are at risk due to the drastic cuts in budgets dedicated to gender equality and gender-based violence (down to 77% of the 2009 allocation).

The findings highlight that Spanish austerity measures have been particularly detrimental to the right to health of disadvantaged groups.  With one of the steepest drops in an already low level of health spending and the implementation of drastic health reforms, Spain has sought short-term cost recovery over all other considerations.  As a result, Spain's previously universal public health system has become fragmented while almost a million undocumented immigrants have been stripped of their previously-recognized right to access public health services.  Health reforms have led 15% of the Spanish population - in particular older persons - to forgo medicines due to costs and have put lives at risk among some of the most vulnerable and discriminated-against sectors of the community.

The factsheet stresses that the pattern of unjust spending cuts has continued despite the availability of more equitable fiscal alternatives - such as progressive taxation and meaningful efforts to tackle tax evasion and abuse that would both balance the country's budget and comply with its human rights duties under international law to deploy the maximum available resources to fulfill economic and social rights.

In 2010, Spain received and accepted several recommendations from the previous UPR focused on protecting the economic and social rights of those who have been worst affected by the crisis - including women, children and migrants. Further guidance on protecting human rights in the context of Spain's economic crisis was given in May 2012 by the United Nations Committee on Economic, Social and Cultural Rights, which called on the state to redouble its efforts to guarantee these rights for everyone without discrimination, and in particular for the most vulnerable.

As Spain faces up to the scrutiny of the United Nations on January 21, CESR is calling on member states to hold Spain accountable for what it is doing to comply with these recommendations, to address the human rights impact of its austerity policies, and retool its social and economic policies to protect the most disadvantaged in line with its human rights duties.