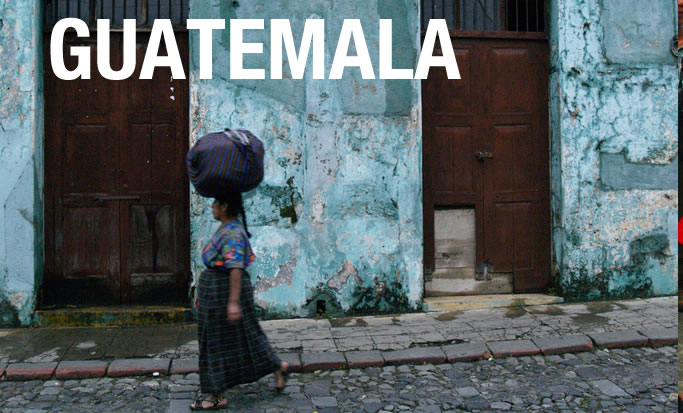 Guatemala has some of the worst social outcomes in Latin America. About 50 per cent of children under five suffer from chronic malnutrition; almost one in three children does not complete primary school; and 290 women die from complications in pregnancy or childbirth (for every 100,000 live births), the worst rate in Latin America along with Bolivia. Despite being the largest economy in Central America, Guatemala has the lowest human development index (a composite measure of life expectancy, health and education outcomes) of any country in the sub-region.

Moreover, a closer look at disaggregated indicators on health, education and nutrition reveals wide disparities along lines of gender, ethnicity, socio-economic status and geography (i.e. differences across regions, among municipalities within the same region, and between the rural and urban populations). For example, the infant mortality rate among the indigenous population is 30 percent higher than that of non-indigenous children. Maternal mortality is almost 10 times higher in the predominantly indigenous departments of the highland region than in departments with the lowest proportion of indigenous population. Primary education completion rates for girls are 10 percent lower than for boys, and the gap in school enrollment rates between the richest and poorest children is the widest in Latin America.

The historical legacy of armed conflict, political repression and institutionalized discrimination against indigenous people over centuries may account in part for this state of affairs. As a developing country struggling to meet both the demands of post-conflict transition and the challenges of a globalized economy, tackling poverty and exclusion must be understood as a long-haul task.

The 1996 Peace Accords which ended the 36-year internal armed conflict set out a road map for addressing these ills as underlying causes of the conflict. Agreed and adopted by representatives of the state, political parties and civil society, the accords set out a detailed framework of commitments explicitly aimed at the realization of economic, social and cultural rights as a solid foundation for peace.

Progress has not kept pace with these commitments. Many of these pledges have remained a dead letter, with some of the most important structural reforms mandated by the agreements - particularly those related to land and taxation - having been repeatedly blocked by those who see their vested interests threatened by them.

Rights or privileges?: Fiscal commitment to the rights to health, education and food in Guatemala

During 2008 and 2009 CESR conducted a collaborative and interdisciplinary research and advocacy project on the right to health, food and education with Instituto Centroamericano de Estudios Fiscales (ICEFI), an organization which undertakes research, analysis, training and advocacy on fiscal policy in Central America. The study was conducted by a team that included researchers from CESR and ICEFI, as well as Guatemalan experts in the field of health and political economy, and representatives from Guatemalan social movements. The project included a case study on the municipality of Senahu in Alta Verapaz, where the human impact of the issues described in the report were analyzed in context. A series of group and individual interviews enabled the team to document the stories and experiences of individuals from affected communities, whose voice gave a more compelling account than any set of statistics or indicators.

The report argues that one of the main reasons for the persistent and historical non-realization of economic and social rights in Guatemala is the lack of political will by democratic governments to invest more in upholding those rights, and ensuring that resources reach the most vulnerable population. Guatemala's social budget as a percentage of GDP is one of the lowest in the region. Moreover, the historical pressure by social elites has blocked every effort at fiscal reform in order to maximize the public resources needed to meet Guatemalans' needs.

Jorge Santos looks forward to next Sunday's presidential elections and voices concerns over what the outcome may mean for normal people.

By failing to implement a fair and progressive tax policy, the Guatemalan state systematically violates economic and social rights.

Produced with Planned Parenthood abd the Multidisciplinary Group on Sexual and Reproductive Rights of Guatemala.

Guatemala: Submission to UN Committee on the Rights of the Child (CRC)

CESR's joint submission with Instituto Centroamericano de Estudios Fiscales (ICEFI) to the UN Committee on the Rights of the Child.

Fiscal commitments and the rights to food, health and education in Guatemala (2009).

This 2008 factsheet focuses on the rights to health, food and education in Guatemala.

Guatemala: Submission to the UN Special Rapporteur on Education

Guatemala: Submission to the UPR

Submission by CESR and Instituto Centroamericano de Estudios Fiscales (ICEFI) to the Universal Periodic Review, May 2008