A trail of hope from Geneva to Equatorial Guinea: using the UPR for national level impact 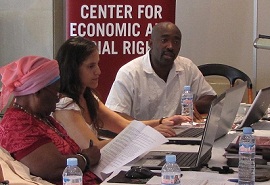 As the end of 2011 draws near, human rights practitioners are reflecting on the first cycle of the Universal Periodic Review (UPR) which came to a close with the 12th Session in October this year. The UPR is a relatively new mechanism, set up in 2006 under the auspices of the Human Rights Council to complement the United Nations’ other human rights bodies by allowing states to review one another’s performance in relation to the full gamut of human rights. CESR has been actively engaged with the UPR in 2011, both through direct advocacy efforts at its sessions in Geneva and by providing support to human rights defenders eager to make use of the new body to challenge the silence and impunity often surrounding economic and social rights abuses in their own countries.

With bloody unrest continuing on streets of cities such as Damascus and Deir al-Zor, Syria's appearance before the UPR on 7 October was a politically charged event. Working in collaboration with the Arab NGO Network for Development, CESR presented a joint submission to the Human Rights Council in advance of the session, emphasizing the economic and social rights deprivations underpinning the protests that have been dominating headlines in the global media.

Another country in the grip of crisis, albeit one of a different nature, is Ireland. The former economic powerhouse was likewise facing the scrutiny of its peers at the 12th Session of the UPR, just as a series of draconian ‘austerity budgets’ implemented in the wake of the country’s economic meltdown were causing severe retrogressions in economic and social rights. As the only international NGO on hand to highlight the human rights ramifications of the Irish government’s economic recovery policies, CESR played an important role in reaffirming the concerns of Irish civil society organizations by bringing a range of economic and social rights issues to the attention of the Council, along with recent statistical data analysed through a human rights lens. A full report, "Mauled by the Celtic Tiger: human rights in Ireland's economic meltdown", providing an in-depth human rights analysis of the causes and consequences of Ireland´s economic collapse and of government responses to it, will be published early in 2012.

The case of Equatorial Guinea provides an eloquent example of the UPR´s potential, if used strategically, to prompt real change at the national and local level. In 2009, CESR joined forces with human rights defenders in the country to enable their voices and concerns to be heard at the UPR sessions in Geneva. The unique opportunity that the UPR represented for the country cannot be overstated. Economic and social rights violations remain rife in Equatorial Guinea despite the torrent of revenue flowing from its oil resources. While GDP per capita soared from $7,600 in 2000 to $35,000 in 2008, making it the wealthiest country in sub-Saharan Africa, education and health indicators in the country continue to lag far behind many of its poorer African neighbors, and in some cases have deteriorated over this same period. Yet human rights defenders attempting to promote social justice and equitable development in their country face fierce repression by the government of Teodoro Obiang, which seized power in a coup over three decades ago. For most, their attendance at the Geneva sessions was the first time they were able to address their concerns openly before officials of their own government.

In coordination with several international and Equatoguinean organizations covering a range of human rights concerns, CESR was able to place compelling evidence of economic and social rights violations before the Human Rights Council, with a particular focus on the misuse of resources. Practically all the concerns raised by CESR were echoed and reflected, sometimes verbatim, in the formal recommendations resulting from the Review.

In order to ensure that these recommendations did not remain a dead letter, but could be used by the country's fledgling civil society to push for meaningful reforms, CESR organized a two-day strategy and capacity building event for Equatoguinean activists in September 2011. Given the risks of holding the meeting in the country, the event was held in Madrid, providing a safe and unique space for defenders to strategize about the significance of the UPR recommendations and potential pathways to ensuring implementation, including setting benchmarks for progress on economic and social rights. In the words of the participants, the event planted the seeds of an agenda for change, and provided them with the tools they needed to maximize the impact of the UPR at the national level.

In 2012 CESR will continue its efforts to ensure effective international accountability for the protection of ESC rights, both through existing UN human rights mechanisms, and recently adopted ones such as the new UN compaints mechanism on economic, social and cultural rights. As well as working to make these mechanisms effective, we will continue to provide strategic support to national level activists in accessing them. Although the significance of economic and social rights is becoming ever-more recognized, much work remains to be done to ensure that these rights get equal attention internationally, and that the scrutiny they receive in Geneva or New York results in meaningful and lasting changes back home.