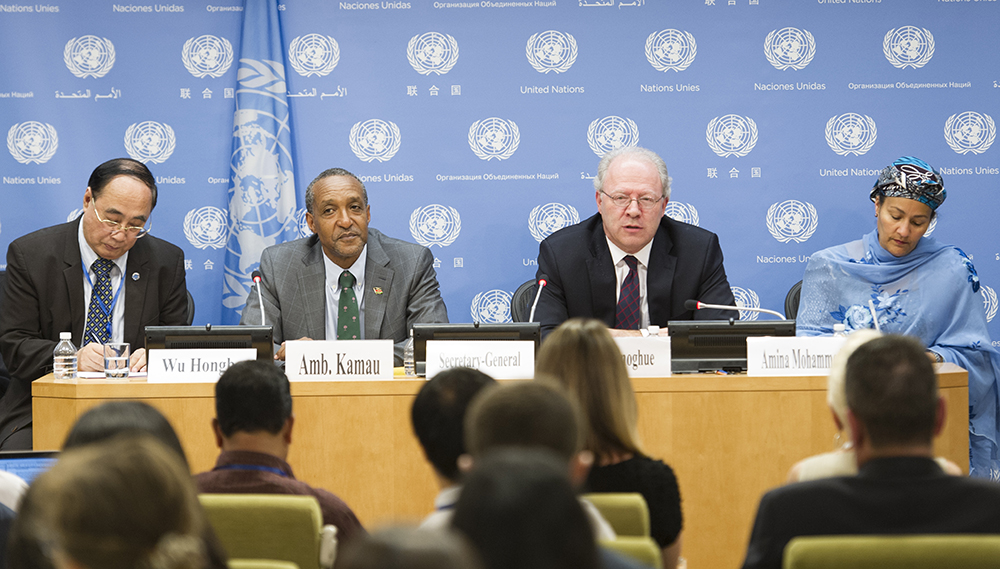 At around 6:30pm on Sunday, after frantic negotiations all weekend, the final version of ‘The 2030 Agenda for Sustainable Development’ was agreed by UN member states in New York, including the Sustainable Development Goals (SDGs) and targets themselves. The negotiations were intended to close on Friday, but by 4:30am on Saturday morning, it was clear that consensus was still out of reach. The contentious issues were frustratingly familiar: the scope that should be given to the principle of Common But Differentiated Responsibilities (CBDR); language on climate change and human rights; and developing countries’ ‘policy space’ particularly vis-à-vis international financial institutions (IFIs).

By Sunday, compromise language had been found (or imposed) for all of these issues, but adoption was delayed by several hours due to wrangling over that familiar UN lightning rod, ‘colonial and foreign occupation’. There were also justified rumblings of discontent over eleventh-hour ‘tweaks’ to two SDG targets on genetic resources at the behest of the US,  when the target language was supposed to be sacrosanct. In the end, no one was perfectly happy – but such is diplomacy. With a mixture of exhaustion and elation, the delegations moved towards adoption – much to the relief of most civil society representatives in the room, who feared that further delay would only water down the text further.

For CESR it was particularly disappointing to see human rights language become a bargaining chip at the eleventh hour, given that we have been striving since 2010 to see human rights principles and obligations meaningfully reflected in the post-2015 agenda. Moving into Friday, the draft Declaration text included a very strong recognition that the realization of all human rights is a principal aim of sustainable development, and an explicit commitment to non-discrimination for all:

"This is an Agenda which seeks to respect, protect and fulfil all human rights. It will work to ensure that human rights and fundamental freedoms are enjoyed by all without discrimination on grounds of race, ethnicity, color, sex, age, language, religion, culture, migration status, political or other opinion, national or social origin, economic situation, birth, disability or other status."

On Friday night, two negotiating blocs of member states – the African Group and the Arab Group – raised fierce (and legally incoherent) objections to this language and demanded several caveats, including the removal of ‘other status’ at the end of the list of protected grounds (used in human rights treaties ever since the Universal Declaration). Sadly, it seems clear from statements made by certain member states that this was motivated by the desire to avoid recognizing the rights of LGBT people (they also objected to the phrase ‘all social and economic groups’ elsewhere in the document for similar reasons, and insisted that every use of the phrase ‘gender equality’ be followed by language about the empowerment of women and girls). This became a redline issue, with the African and Arab Groups refusing to countenance the language provided while others (including many Latin American countries, the EU and the US) held firm against dilution. In the end, the compromise the drafters found was to replace the text with a verbatim cut-and-paste of language from the Rio+20 outcome document, The Future We Want.

"We reaffirm the importance of the Universal Declaration of Human Rights, as well as other international instruments relating to human rights and international law. We emphasize the responsibilities of all States, in conformity with the Charter of the United Nations, to respect, protect and promote human rights and fundamental freedoms for all, without distinction of any kind as to race, colour, sex, language, religion, political or other opinion, national or social origin, property, birth, disability or other status."

It was a savvy political strategy, as the Rio language still includes the all-important phrase ‘or other status’ (recognizing that discrimination on any ground is unacceptable) but would have been nigh impossible for the African and Arab Groups to object to, given its status as agreed language in a political declaration which is a foundation text for post-2015.

However, the compromise was profoundly disappointing as the Rio language manifests a number of weaknesses and gaps in relation to the previous language, including by failing to specifically mention age, ethnicity or migration status as prohibited grounds of discrimination. It is also a shame to see a statement which made important, explicit links between the post-2015 agenda itself and respecting, protecting and fulfilling human rights replaced with a general reaffirmation of ‘importance’ and ‘responsibilities’. (It is also worth noting that language on the right to water and sanitation – which many civil society organizations fought tirelessly for – in the end also reverted to the formulation agreed to at Rio+20, after the US objected to more concrete formulations around ‘realizing’ the right.)

To be sure, it is deeply frustrating and disconcerting that we are still fighting these battles in the halls of the UN. It is now more than two decades since the UN reaffirmed the interdependence of human rights and development at the Vienna World Conference on Human Rights; and more than twenty years since the UN human rights system first recognized sexual orientation and gender identity as prohibited grounds of discrimination.

However, there is other powerful human rights language in the outcome document to take solace in, including a recognition in the preamble that the SDGs ‘seek to realize the human rights of all’. Indeed, overall there is cause for both frustration and celebration when reviewing the final outcome document. Lining it up against the ‘Human Rights Litmus Test’ that the Post-2015 Human Rights Caucus developed last year, we can declare partial success in every category – which in some ways is more than we might have dared hope for back in 2010 under the ‘reign’ of the deeply inadequate Millennium Development Goals (MDGs).

There is precious little in the document to allay civil society fears about corporate ‘capture’ of development or reassure them about meaningful private sector regulation and accountability – but a welcome reference to labor, environmental and human rights standards (including the Guiding Principles on Business and Human Rights) did finally make the cut. The agenda includes potentially transformative commitments for women’s rights (especially when compared to the MDGs), but it was clear from the negotiations and textual compromises that sexual and reproductive health and rights are still disputed and violated by many governments – and the SDGs are unlikely to spur a wholesale shift in this regard.

Despite some important references to State-citizen accountability, participation and respecting human rights, the framework for monitoring and review of the agenda’s implementation is vague and voluntary. In terms of financing and resources, the already-weak Financing for Development ‘commitments’ agreed in Addis in June were selectively interpreted further in favour of developed countries (for example on debt and policy space), fomenting further fear about the real intentions of developed countries to enable the profound systemic changes necessary to finance and implement this agenda. However, we shouldn’t forget the important resource-related commitments enshrined in the SDG targets, especially around debt, progressive taxation, illicit financial flows and enhancing the representation of developing countries in global economic governance.

Indeed, despite its compromises and shortfalls, this 2030 Agenda for Sustainable Development gives the human rights movement much to work with over the next 15 years. In its universality, in its focus on tackling inequalities and insistence on ‘leaving no one behind’, and in its declaratory anchoring in international human rights commitments, it has the potential to be truly transformative for human rights enjoyment. The real litmus test will of course be implementation, in particular whether we will see meaningful reforms that remove the systemic obstacles to equitable, sufficient and accountable financing for sustainable development, and whether the monitoring and accountability infrastructure put in place at the national, regional and global levels ensures that all states and other power-holders are answerable to the people whose lives and rights they affect.

There is a lot of hard work to be done to unleash the potential of the SDGs as a vehicle of human rights realization and accountability. But the space has been opened, and a comprehensive framework of hard-won commitments is about to be put in place in all countries across the globe. For the human rights movement and its allies in development, efforts must begin in earnest now to ensure this historic opportunity is not lost.