Social rights; the other deficit

This article by CESR Program Director Gaby Oré was published in El País, Spain's most important newspaper, on 7 May 2012.

Amendments to the 2012 budget, described as the most restrictive in the history of Spanish democracy, have recently been debated in Congress. Barely a week after the €27.3 billion reduction in public spending, a further €10 billion in cuts to health and education have been added. Some 83 per cent of the retrenchment corresponds to direct public spending, and the majority of this is in sensitive areas of social policy. These cuts will most harshly punish women on low incomes, young people and the immigrant population. The impacts will be felt beyond the borders of Spain thanks to the dramatic cut in development cooperation, which is being reduced by 72 per cent. In both form and content, these measures have been adopted without the consultation of social sectors, amidst the increasingly obvious lack of economic protection afforded to ordinary families, and without consideration of the human rights obligations that the Spanish government is obliged to observe.

However, neither the unprecedented cutback in social spending, designed to achieve an accelerated reduction of the deficit, nor the weak announcements of greater revenue-generation through taxation – including the must-questioned fiscal amnesty – have been enough to satisfy the expectations of Brussels or the debt speculators. Instead, the growing skepticism among both these groups with regard to public accounts, together with the damage the austerity measures will do to the domestic economy, threaten to deepen the economic crisis.

Having come to this point, it is reasonable to ask: Is the state allowed to adopt measures in response to the crisis which ignore social rights? To whom is the state ultimately accountable, the markets or the citizenry? In other words, it is necessary to go beyond the simple question of the efficiency of the state accounts, and ask whether it is legitimate for the government, in its eagerness to close the budgetary deficit, to deepen a deficit in social rights.

Spain has proven incapable of advancing a more equitable model that shifts more of the fiscal burden onto those who have more, the so-called “grand fortunes” or capital rents. The revenue-increasing measures announced by the government are weak and insufficient. They do not suggest a determination to set the stage for more progressive fiscal policies. If the Spanish state does not broaden its revenue base, nor  corrects the discriminatory impacts of the current fiscal model, those sectors of the population that are most affected by the cuts will be precisely the ones that continue to face the greatest obligations to contribute to the treasury.

This disequilibrium between (minimal) efforts to increase revenue and the (disproportionately harsh) austerity measures mark a retrogressive tendency in regard to the fulfillment of social rights. According to the most recent (2011) Living Conditions Survey, in Spain 22 per cent of households live below the poverty line. The poverty rate grew by more than two points between 2009 and 2011. At the end of last year some 580,000 households in Spain did not receive any income either from employment or from unemployment social security provisions; that is to say, they found themselves in extreme poverty.

The rise in inequality is likewise palpable. The percentage difference between the highest incomes in comparison to the lowest rose from six to seven points in just one year between 2009 and 2010. In addition to the evidence of the direct impact of the austerity measures, the retrogression is social rights is marked by a lack of diligent efforts on the part of the state to counter the backsliding made clear by both these and other social indicators in recent years.

The Government has not explained the reasons or criteria employed in deciding to cut more from one area than another, nor indeed has it provided arguments that might allow people to understand why four times as much has been removed from international cooperation than has been taken from defense. Similarly, the citizens are not told why it was decided to do away with support to the Autonomous Communities to  implement the Dependency Law, or why the Fund for the Promotion of Employment has been eliminated. In general, it does not give an account that might permit Spanish society to understand the level of reasonableness or appropriateness of such decisions, as is required by international human rights norms. Nor has the state taken into consideration the economic and social rights provisions contained in the Constitution as directive principles of public policy, as is required by this same instrument. Moreover, it has not created systems of civil society participation and scrutiny to provide opinion and influence.

The participation of the citizenry in decisions which affect it is not optional for governments; it is a fundamental and inalienable right which gives meaning and substance to democracy. The Spanish government must be held accountable for its political commitments, but also for the obligations which derive from having signed international human rights treaties. For this reason, civil society organizations have turned to the accountability mechanisms of the United Nations system to channel and articulate their complaints and offer alternatives.

The International Covenant on Economic, Social and Cultural Rights obliges the state to defend essential living standards of the population.

Spain signed the International Covenant on Economic, Social and Cultural Rights (ICESCR) in 1977 and, in consequence, the state is obliged to follow the rules and standards set out in this treaty. This afternoon and tomorrow (May 8) in Geneva, where the Committee of experts that oversees this Covenant is based, Spain will be questioned  on the current state of these rights in the country. The Government and civil society will be given the opportunity to present their arguments before the Committee on different areas of concern regarding these rights, and the Spanish state will be required to take on commitments to implement corrective measures in response to recommendations emanating from the Committee. On this occasion of this crucial dialogue, a coalition of 19 organizations has presented a joint report to the experts, providing them with alternative information to that presented by the government. This report throws into relief the worrying situation of inequality, discrimination and deficits in the different rights protected by the ICESCR.

In accordance with the parameters established by the Covenant, the Committee will have the opportunity to interrogate the Spanish state as to whether “the maximum available resources” were deployed to achieve the progressive realization of the economic and social rights of the population; and whether it carried out a careful and thorough evaluation of the resources at its disposal along with alternative options for resource generation.

Civil society organizations have called on the Committee to evaluate whether the state acted with due diligence before, during and after the process of designing, implementing and supervising the austerity measures, including the cuts in social spending. The organizations also called on the Committee to determine whether the state put in place adequate measures to minimize or counter the impact of these policies on the most vulnerable sectors of the population; and whether, in the current crisis context, the state took care to respect and guarantee minimum core levels of rights such as education, health, housing and others set out in the Covenant.

The Spanish state can take advantage of this opportunity to explain, and indeed correct, the excesses and mistakes of its austerity measures. What it cannot do is continue to subordinate social rights to the demands of the market, marching in lockstep to the conditions of Brussels while ignoring its human rights obligations and the demands of civil society. Nor should it forget that its obligation to give account in Geneva emanates from the consensus of nations when, at a pivotal moment in history, they decided that all rights and liberties were deserving of the protection of the international community. It is, therefore, an obligation every bit as legitimate as its duty to Brussels. 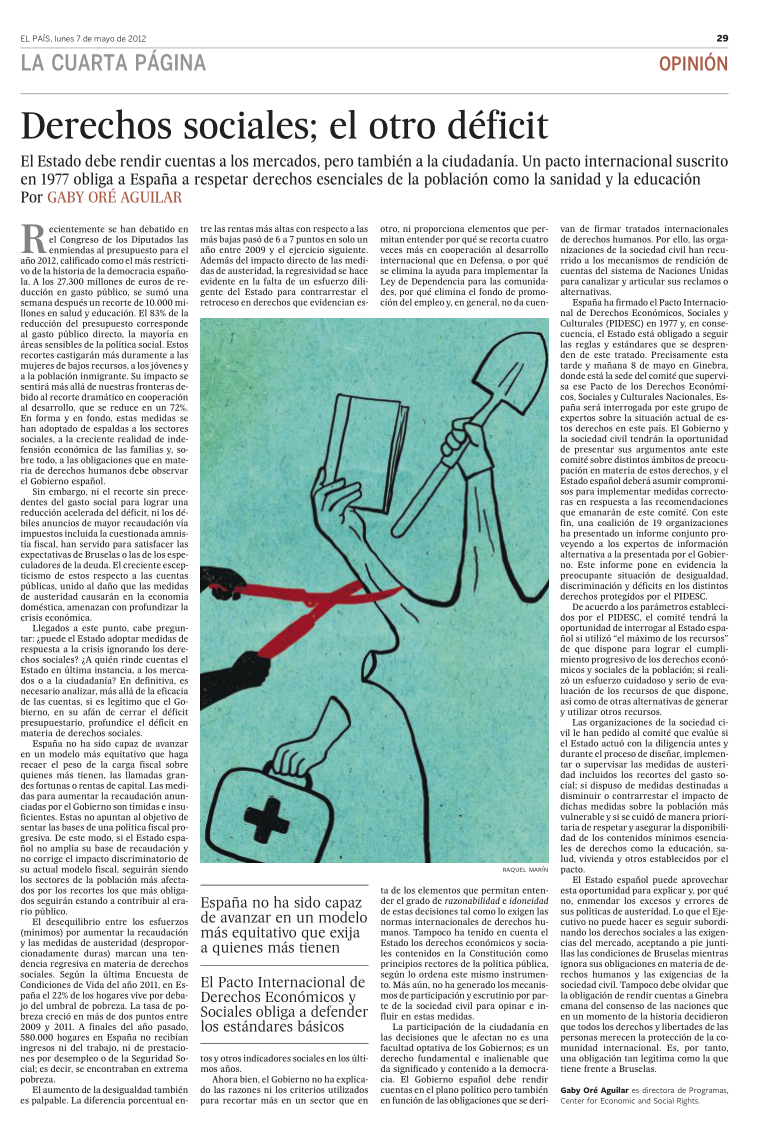