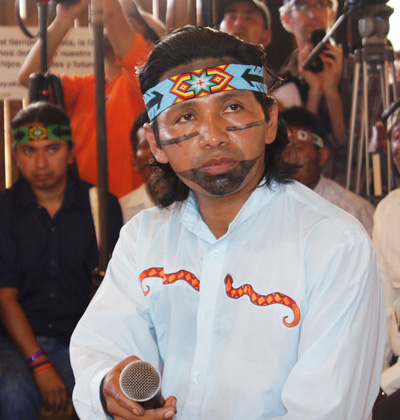 A recent ruling by the Inter-American Court of Human Rights (IACHR), in the case of The Kichwa People of Sarayaku v. Ecuador, marks an important landmark in the recognition of indigenous peoples’ rights and demonstrates the importance of using regional human rights mechanisms to enforce them..

All too often marginalized communities turn out to be victims, rather than the beneficiaries, of ill-considered development policies. This looked set to be the fate of the Sarayaku community in southern Ecuador when the Argentine corporation Compañia General de Combustibles was granted a concession to explore their lands for oil in 1996. Six years later in 2002, when oil workers with a military escort arrived to begin their work in the community’s Amazonian homeland, the future appeared bleak indeed for the indigenous people who had lived in harmony with the region’s delicate ecosystem for centuries.

Over a decade of legal contestation and non-violent civil disobedience was brought to a triumphant climax in July this year, however, when the IACHR ruled that the Sarayaku’s right to consultation, along with its rights to community property and cultural identity, had been violated by the Ecuadorian government when it granted the concession. Furthermore, the Court also found that the deployment of explosives in the territory had put the very lives and physical integrity of the community at risk.

The Sarayaku community, which brought the case itself with the support of the Center for Justice and International Law, was given good reason to celebrate when the ruling was handed down. It would seem wise to raise a flag of caution, however, as past experience shows that the power imbalances inherent in such situations may lead to limited compliance with the ruling.

A little over a decade ago, in a situation not dissimilar to that of the Sarayaku, Nicaragua’s Awas Tingni Mayagna community likewise won a favorable judgment from the Inter-American Court of Human Rights. On that occasion, the IACHR ruled that Nicaragua’s government had violated the community’s collective rights when it granted a logging concession to the Korean lumber company Solcarsa without their consent. The decision also set an important precedent for indigenous rights, as it established that “the right to property, as affirmed in the Inter-American Convention on Human Rights, protects the traditional land tenure of indigenous peoples”.

It would have been premature to declare the Awas Tingni’s battle had been won, however, as six more years of campaigning were required to get the Nicaraguan government to implement the decision by providing the community with formal legal title to the land. This despite the fact the IACHR had stipulated its ruling should be implemented within 15 months. Other steps set out in the 2001 decision remain unheeded to this day, and as such the continued efforts of legal advocates are crucial if the Awas Tingni’s rights are indeed to be upheld.

As part of an ongoing research project together with the University of Deusto, CESR is analysing the factors affecting implementation of the Awas Tingni decision in order to draw lessons learned. It is our hope that the findings of this research will provide useful insights for rights defenders and other actors involved in ESCR adjudication initiatives. As the Sarayaku in Ecuador know only too well, it is essential that the decisions handed down by the IACHR are promptly reflected in concrete actions by the relevant authorities.