UNESCO should reject a new bid to honor Teodoro Obiang Nguema Mbasogo, the president of Equatorial Guinea and now Africa's longest serving ruler, with a prize in his name, a group of nine human rights organizations said today. 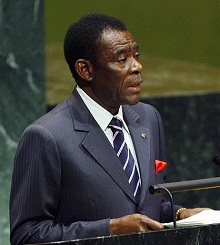 UNESCO’s executive board, which is meeting in Paris until October 6, 2011, is to consider a proposal for a $3m UNESCO life sciences prize, to be funded by the “Obiang Nguema Mbasogo Foundation for the Preservation of Life”. The prize was suspended last year after an outcry from concerned Equatoguineans, human rights groups, anti-corruption campaigners, and prominent literary, scientific and cultural figures.

An effort by the Obiang government to reinstate the prize in May failed to make it onto the agenda. But the current initiative has the nominal support of other African countries following an African Union resolution at its summit meeting in Equatorial Guinea in July, which Mr. Obiang hosted as this year’s AU chairman. “UNESCO should not honor President Obiang,” said Tutu Alicante, of the non-governmental human rights organization EG Justice. “If he wishes to fund science and education around the world, he should start with his own country, where many still lack basic services such as electricity and clean water, while the president and his family flaunt an extravagant lifestyle that is the subject of legal investigations around the world.”

According to evidence produced in 2004 and 2010 investigations by the US Senate Permanent Subcommittee on Investigations, President Obiang and close family members have diverted tens of millions of dollars from their country's natural resource earnings to their private benefit.

The 2010 US State Department human rights report decried “official corruption at all levels of government” and noted that “[the] president and members of his inner circle continued to amass personal profits from the oil windfall.” Equatorial Guinea is consistently ranked among the most corrupt countries on the globe by Transparency International.

The $3 million UNESCO-Obiang Nguema Mbasogo International Prize for Research in the Life Sciences was set up in 2008 but has never been awarded. Implementation of the prize was frozen pending further discussion in June 2010. In October, the UNESCO Executive Board voted to suspend it until a consensus on the matter could be reached by member states.

That action came about after prominent African figures, Latin American writers, Nobel laureates, scientists and public health professionals, press freedom groups, Cano prize winners, and rights organizations from around the world came together in an unprecedented effort to challenge the prize, citing serious concerns about President Obiang’s record of corruption and abuse.

Critics of the prize have highlighted the contrast between the mandate of UNESCO to promote human rights along with its work to defend free expression, and the record of severe repression and official corruption that have marked President Obiang’s 32-year rule. Severe restrictions on press freedom, together with self-censorship, make it difficult for citizens of Equatorial Guinea to challenge the government from inside the country over sensitive topics such as ongoing foreign investigations into the alleged corruption of President Obiang and his close associates. The government has been repeatedly condemned by UN and other human rights monitors for its systematic use of torture. Recent elections have been criticized as neither free nor fair.

Oil and gas exploitation has made Equatorial Guinea the wealthiest country in sub-Saharan Africa in per capita income, yet the International Monetary Fund and others have expressed concern that government spending on social needs is very low in light of its high levels of poverty. According to an analysis by the Economist Intelligence Unit, Equatorial Guinea spends less on education as a percentage of GDP than neighboring countries such as Cameroon and Gabon.

In August 2010 President Obiang's government shocked the world when it executed four dissident exiles within an hour after a summary military proceeding found them guilty of treason and attempted assassination.