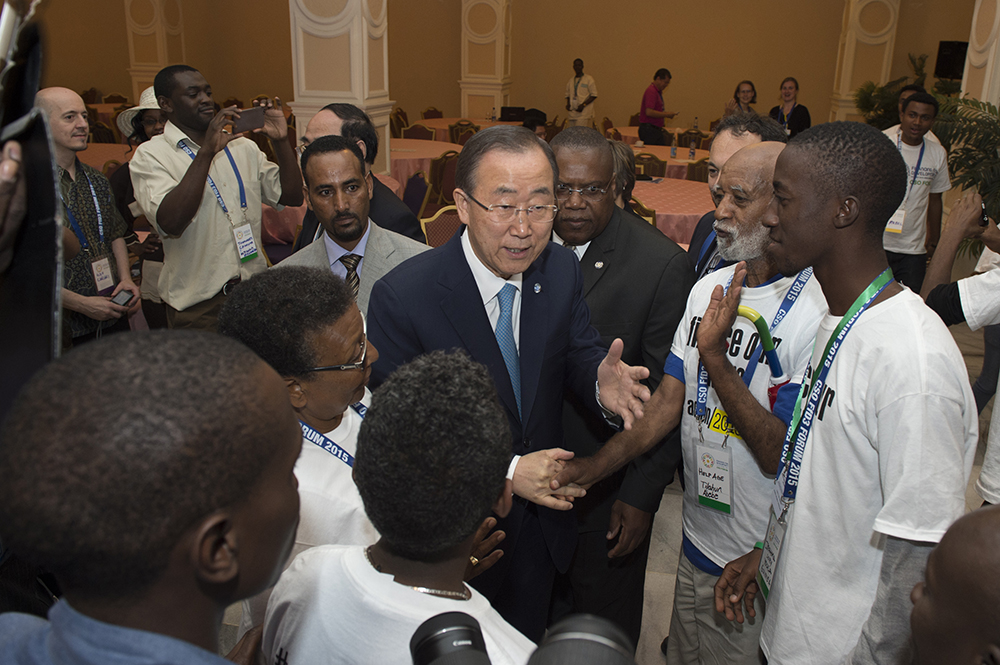 Today, diplomats at the UN in New York enter into two weeks of final negotiations on the new global sustainable development agenda for 2015 to 2030. Coming hot on the heels after a grueling few days in Addis Ababa, which culminated in an agreement on Financing for Development that did not live up to the demands and expectations of the G77 (nor those of civil society), it is difficult to tell what the spillover effects might be. The disappointments of Addis may well harden the resolve of the developing countries to stick firm on certain points; certainly they have already made clear that the inclusion of the principle of “common but differentiated responsibilities” in the outcome document of the September UN Summit which will adopt the new agenda will be non-negotiable for them, despite the firm resistance of the UK, US and others.

In the days before Addis, the co-facilitators released a new draft of the outcome document (which they labeled, with considerable chutzpah, as ‘final’). This will presumably be discussed line-by-line over the next two weeks – a level of detail and rigour lamentably not seen so far in the negotiations, which have mostly been characterized by sweeping and repetitive statements by delegations.

Happily, the revised draft features a number of improvements on the previous ‘zero’ draft. In particular, the language in the Declaration has improved considerably with regard to human rights, thanks to feedback and concrete suggestions by Member States, civil society and the UN Office of the High Commissioner for Human Rights (OHCHR). The drafters have added ‘international human rights treaties’ alongside the Universal Declaration of Human Rights and the Declaration on the Right to Development as instruments on which the agenda is founded; and a reference to access to safe and affordable drinking water as ‘a basic and universal human right’. After  forceful urging from many actors, they have also included age in the list of prohibited grounds of discrimination, and even more crucially, have made the list an open one by adding ‘and other status’ at the end, a crucial recognition that discrimination on any basis is impermissible in development.

Of course, these improvements may be vulnerable to challenge over the next two weeks. The US, for example, has always disputed the right to development and so may well seek to remove reference to it in the Declaration, but developing countries will be very unlikely to accept such a move.

For CESR and many of our allies, the major area of outstanding concern is the ‘follow-up and review’ component of the final agenda, which has been weakened even further from the zero draft into what is now an astonishingly vague and timid vision. Although there are a couple of welcome references to State-citizen accountability as the ultimate goal of this follow-up and review framework, the document offers no clear picture on how progress on the Sustainable Development Goals will be monitored and reviewed, nor what the lines and channels of accountability will be, and includes only very tentative and under-ambitious proposals and guidelines. For example, language merely suggesting that countries may conduct a review process at least every four years has been removed. It is indeed a sorry sign that this is considered too ambitious. Any less would mean countries only assessing their progress a maximum of two or three times during 2015-30.

This is not the responsive, inclusive agenda based on up-to-date data that we were promised. Policies will need to be refined and adapted. Priorities may change. Tactics and strategies will shift, as will challenges. Obstacles to progress for the most marginalized communities may take some time to identify and break down. Monitoring and review processes will play an absolutely indispensable role in defining what is working and what needs to be improved, and in ensuring the experiences and ideas of the most disadvantaged and marginalized people can be reflected and taken on board. How can we ‘leave no one behind’ if we are not regularly and systematically hearing from those that are furthest behind?

Unfortunately, most Member States are failing to see this crucial link – between effective implementation and robust monitoring and accountability. They see efforts to define and bolster a monitoring and review framework as bureaucratic meddling that will undermine national sovereignty and result in blame games and finger-pointing. Some countries (in particular those with a history of receiving aid from donors that comes with a laundry list of onerous conditionalities) see any monitoring that takes place beyond the national level as something that will expose them to infringements on their policy space and scolding from the rich countries and the UN.

The fact is, we now have a much better set of goals and targets than we did in 2000 – and Member States should be applauded for coming to this agreement. But without effective and holistic monitoring and review, and clearly delineated responsibilities for meeting these goals, we will not change the paradigm. Implementation will suffer, and progress towards the most challenging targets will remain off-track and uneven. In short, the much-needed ambition of the goals will be wasted.

Sadly, although much could change over the coming weeks, it doesn’t realistically seem like there are great prospects for significant improvements to this section. The watering-down exercise performed by the drafters was, after all, in response to common complaints from delegates at the last session that the vision for follow-up and review was ‘too prescriptive’.

All these States of course confidently assert that while they don’t want anyone telling them how to do it, they will put in place thorough and inclusive processes at national level. But why would they object to language laying out baselines and basic principles for these national reviews? Of course, different models will be needed in different contexts. But surely meaningful, free and active participation, transparency, and human rights should be fundamental to all national mechanisms and processes? Particularly for an agenda which includes a goal on building ‘effective, accountable and inclusive institutions at all levels’. Periodic, regular reviews involving parliaments, civil society, experts, national human rights institutions and sustainable development councils – and crucially, the people whose situations we are most seeking to improve – should not be too ‘prescriptive’ for anyone. If States really are intending to be accountable to their citizens at the national level for these commitments, then they have no reason not to explicitly signal their intent and commitment to do so in this outcome document.

As CESR has argued since we published Who Will be Accountable? with OHCHR in 2013, underpinning the new agenda with a web of effective accountability mechanisms will be necessary to ensure the new commitments are credible and honored in practice.  Member States now have an unmissable opportunity to address the accountability gaps that have plagued development policy and practice for decades now. However, it is not an accident that this is the only area of the draft outcome document that has been actively and consistently weakened, rather than improved and strengthened. Despite their rhetoric, the idea of being held accountable by the people for their development and human rights commitments is still unpalatable to many governments.

This reluctance is of course being loudly and actively challenged by civil society and social movements across the world. For many civil society actors, the lack of ambition and commitment on accountability is likely to be the most pronounced area of disappointment in the final post-2015 package adopted in September. Even if we don’t win the battle to strengthen the depleted vision in the outcome document, undoubtedly Member States will find themselves being constantly challenged over the next 15 years to transparently monitor and answer to their commitments. CESR, for one, will be working to build on the momentum for human rights accountability that we have helped generate around this agenda. The energy unleashed by the post-2015 process is unmistakable, and the genie is out of the bottle.