As Spanish voters head to the polls amidst the worst economic crisis in recent history, CESR Executive Director Ignacio Saiz warns that democracy without social rights risks becoming a 'dictatorship of the markets'. 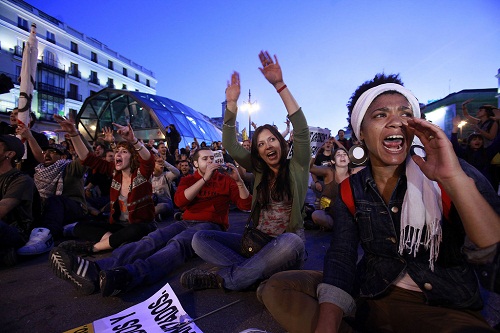 Spain goes to the polls this Sunday in the midst of the worst economic and social crisis in its recent history. Unemployment stands at a record 5 million, affecting a fifth of the working population and half of those under 25, while inequality is rising fast. The puncturing of Spain´s massive housing bubble has left thousands unable to pay their mortgages and facing eviction from their homes. Drastic austerity measures pursued by central and regional governments in order to reduce the budget deficit have cut public sector salaries and frozen pensions. Healthcare budgets have been slashed to an extent described as "borderline criminal". Reforms to make the labour market more flexible and competitive have made employment protections more precarious, with a particularly harsh impact on working women.

This backsliding in social rights has bred an increasing disaffection with democracy, at least in its current form. Since the regional and municipal elections held in May, which saw an upsurge in abstentions, a nationwide protest movement has emerged demanding "Democracia Real Ya" ("Real Democracy Now"). Led by young people, students, pensioners, the unemployed and others most affected by the cutbacks, the 15th May movement has occupied the main squares of Madrid, Barcelona and other cities across the country, frustrated at what they see as a stale bipartisan electoral system in need of reform. Neither the ruling Socialists nor the dominant opposition Partido Popular, they argue, offer an alternative to the unrelenting assault on social rights and the economic policies underlying it.

Like their counterparts in New York’s Liberty Plaza or Cairo's Tahrir Square, what has prompted millions of indignados to take to the streets over the last six months is a sense that true democracy must include economic and social justice. Their indignation is fuelled by the fact that ordinary people have been made to bear the costs of an economic crisis prompted by speculative malfeasance in the financial sector, while those responsible – far from being held to account – continue to reap the benefits.  Faith in democratic institutions is undermined when placating "the market" takes precedence over protecting the rights of citizens, as symbolized by last summer's rushed reforms enshrining limits to future budget deficits in the Spanish Constitution. As politicians scramble helplessly to prevent the country's risk premium reaching dangerous new heights, it is understandable that protestors should question the effectiveness of parliamentary democracy in face of the "dictatorship of the markets".

Social rights are not a luxury to be observed only in times of plenty. They cannot go into recession in times of economic crisis, but are all the more important to safeguard in times of resource scarcity. The recent protests have echoed long-standing demands by human rights and social justice campaigners for more equitable pathways to economic recovery. These include progressive tax reforms to generate public revenue more fairly and cut down on mass-scale corporate tax avoidance; reinforcing social protection mechanisms for disadvantaged populations and implementing counter-cyclical macroeconomic policy measures.

Sunday's presidential elections are a chance for voters to have their say on these issues. But the widespread frustration at the austerity of choice indicates that democracy is the real deficit that needs addressing, and that respect for social rights must be at the heart of a democratic renewal.