Egypt to answer to UN for deteriorating human rights conditions 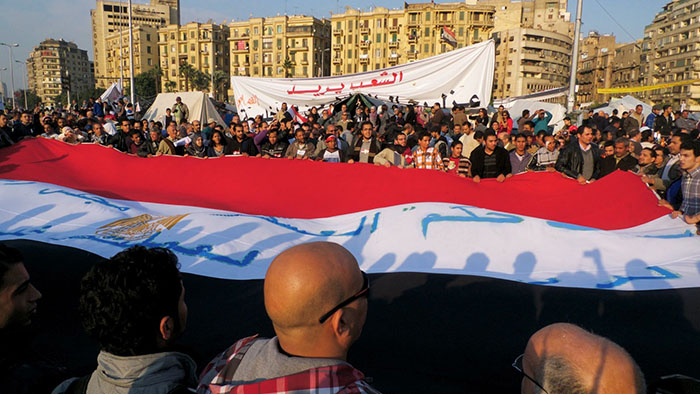 With the government pursuing social and economic policies that burden large swathes of the population—whilst violently cracking down on human rights defenders who raise concerns about these policies—the human rights situation in Egypt has gone from bad to worse in recent months.

The country has adopted harsh austerity measures in a short-sighted effort to attract foreign investment, while ignoring the demands for social justice that fuelled the Arab Spring uprising. Moreover, these reforms have been pushed through without meaningful consultations, and space for public participation has been shut down.

Earlier this year, CESR and the Egyptian Center for Economic and Social Rights coordinated a joint report for the UPR which was endorsed by some 130 non-governmental organizations and labor unions. It set out in detail the desperate state of economic and social rights in the country. The report demonstrates that, since the people of Egypt took to the streets in 2011, successive governments have failed to address the root-causes of socio-economic inequality that fuelled the uprising in the first place.

The new government of Abdel Fattah al-Sisi seems disinclined to buck this troubling trend. As detailed in a new set of factsheets prepared by the Center for Economic and Social Rights and its partners, austerity measures continue to exacerbate the country’s already high levels of deprivation. Unemployment has continued to rise and, despite provisions in the new constitution explicitly calling for progressive increases in funding to education and health, investment in the former has stagnated while a 2013 promise of a universal health insurance scheme has not been fulfilled. Rising food prices are meanwhile driving corresponding increases in food insecurity and malnutrition.

At the same time, there has been no effort to reform the country’s private sector, or to challenge the extreme concentration of resources among the military and other politically-connected actors.  Regressive tax policies, and an apparent unwillingness to tackle tax evasion, have contributed to the pattern of worsening poverty and marginalization. The government has likewise made little progress in tackling the endemic corruption that helped fuel the revolution, and which has been repeatedly criticized by UN human rights bodies. Instead, impunity for corruption has been codified. For example, Law 4/2012 authorizes the General Authority for Free Zones and Investment to settle cases of investment fraud, theft and corruption outside the criminal court, thereby nullifying criminal procedures.

These reforms have been accompanied by a crackdown on civil society organizations. A new NGO law has been proposed that would effectively cripple the work of many social justice organizations, while the penal code has been ambiguously amended to include a threat of life imprisonment for the receipt of foreign funds for any action that might “undermine national unity”. Amidst growing fears over the security of human rights defenders, many of CESR’s partners in Egypt have not been in a position to attend the UPR session in Geneva, despite having engaged actively in the process as civil society organizations across the globe are entitled and encouraged to do.

Egypt thus finds itself caught in a spiral of popular dissatisfaction, social unrest, and repression.

Egypt’s appearance before the UPR comes a year after the UN Committee on Economic, Social and Cultural Rights strongly criticized the country for its poor performance with regard to many of these same issues.

The UPR differs from other UN human rights bodies in that states are reviewed by representatives from other member states, rather than by committees of experts. As such, the voices of Egypt’s peers in the community of nations will now join those of other international experts and the many civil society organizations that have sought to take it to task over continuing human rights violations. The review will result in a set of recommendations to the government. It is to be hoped that this review will serve to hold the Egyptian government, and others with strong influence over its economic policies, more accountable for the full range of human rights violations that continue in the country.