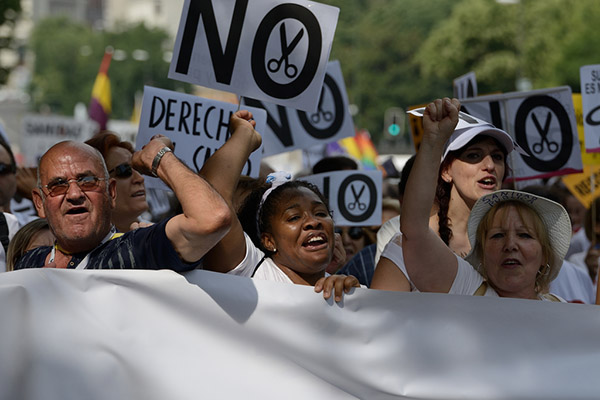 After five years of economic crisis and a series of austerity budgets that have served only to compound its problems, people in Spain are being pushed to the limits of resilience. Vulnerable groups such as persons with disabilities, undocumented migrants and poor women and children are being hit hardest by the country’s spending cuts. While Brussels presses for further reforms to be implemented, and social protection systems are being threatened, both regional and international human rights mechanisms are becoming increasingly concerned over the human impacts of yet more ‘belt tightening’.
After his five-day visit to Spain last month, the Council of Europe's Commissioner for Human Rights, Nils Muižnieks released a statement calling on Spanish authorities “to assess and limit the negative impact of budgetary cuts on the most vulnerable groups” and reminding the government of its obligations under international human rights law. The negative impact of retrogression on the enjoyment of economic and social rights in Spain has also drawn the attention of the United Nations High Commissioner for Human Rights, Navi Pillay, who visited Spain on June 14th. CESR, which continues to work closely with partners on the ground in Spain, met with both Commissioners to voice concern over the government’s failure to attend to the recommendations issued last year by the UN Committee on Economic Social and Cultural Rights (CESCR).  These included the Committee’s recommendations to review the austerity measures which are causing “disproportionate” harm to the most vulnerable and marginalized groups and individuals; to secure minimum protection levels for the most vulnerable groups; to avoid “retrogression” in a number of specific areas and to adopt “specific measures and strategies to mitigate the adverse effects of the crisis".
On the occasion of Spain´s review by the Committee in 2012, CESR together with a coalition of 19 civil society organizations, coordinated a shadow report that documented the retrogressions unfolding in Spain. The Committee´s recommendations echoed many of the concerns in the shadow report. Nevertheless, the Spanish authorities have been unrelenting in their pursuit of ill-conceived austerity measures. All over the country, collectives and groups of citizens affected by unemployment, foreclosure, and limitations or denial of access to health care are mobilizing in social protest, while the state is responding with increasingly repressive measures, according to the claims presented by human rights and citizens’ organizations present at the meeting with the Commissioners. CESR is working together with organizations in Spain to make use of other avenues for justice and accountability at the national and international levels, with the objective of counteracting the arbitrary and discriminatory patterns of budget cuts being undertaken in Spain, as in many other countries in Europe.
In the same vein, CESR is also working with national human rights institutions across Europe to enable them to play a more active role in addressing and challenging unjust austerity measures.  Three recent forums in Berlin, Brussels and Vienna organized by the German Institute for Human Rights and the European Network of National Human Rights Institutions, explored the lessons to be learned from austerity policies in Greece, Ireland and Spain and the efforts of NHRIs, UN human rights bodies and civil society groups such as CESR to address the deteriorating human rights situation in these countries. CESR is also contributing to a forthcoming Issue Paper, 'Safeguarding Human Rights in Times of Economic Crisis', to be published by the Council of Europe Commissioner for Human Rights, which will include a focus on the role NHRIs can play in addressing the harmful impacts of the austerity drive.
To top
Back to top