Austerity and Human Rights in Ecuador: An Urgent Appeal to the IMF

New York, October 15—The below-signed group of human rights and fiscal justice organizations express our solidarity with the Indigenous movement and other popular movements in Ecuador that successfully prompted the government’s commitment to repeal Decree 883 of 2019. This decree was part of a broader package of fiscal consolidation measures agreed between the Ecuadorian government and the International Monetary Fund (IMF) in March. These measures were adopted without proper participation and due regard for democratic procedures and principles of human rights that should be considered and adhered to in reforms of this magnitude. The attempt to impose these measures, coupled with the State’s inappropriate response to legitimate protest by Indigenous communities, led to eight tragic and unnecessary deaths. We express our deepest condolences to members of the Indigenous movement for their losses.

No rights without resources
For many years the signatory organizations have been committed to visibilizing the impacts of fiscal policies on human rights, and insisting on the necessity of basing these policies on the obligations of States arising from international human rights standards. There are no rights without resources, and fiscal decisions cannot be made without regard for people. Measures adopted without taking peoples’ voices into account must be re-examined.

The events in Ecuador are one more example of how fiscal austerity policies have turned into a timebomb in various Latin American countries. Their supposed benefits in other contexts have failed to live up to what was promised, and fiscal adjustment has resulted in economies being plunged into crises of ever-larger proportions, based on dogmas that have proved to be ineffective, such as the idea that fiscal contractions enable the expansion of the economy.

An Indigenous struggle for social rights and fiscal justice

In leading the fight against the austerity policies adopted under the auspices of the IMF, the Indigenous peoples of Ecuador join a wide spectrum of social sectors who have done the same in Brazil and Argentina as well as other countries of the region, who themselves are among the 130 countries of the world currently affected by fiscal adjustment policies. What has happened in Ecuador, and the precedent in Colombia of the Indigenous minga earlier this year, demonstrates that ethnic, social and environmental justice have a strong link with fiscal justice. As indicated by the Confederation of Indigenous Nationalities of Ecuador and the Confederation of Nationalities of the Ecuadorian Amazon, this protest is not just about the price of fuel. Rather, Indigenous peoples are resisting policies which would put in jeopardy their very future, their territories, their social rights and those of future generations, if they are not halted immediately.

Furthermore, the violation of civil and political rights through repression and the excessive use of force by the State cannot be an appropriate response to a demand for social rights that have been relegated to low priority for years, and are at risk of retrogression as a result of the measures agreed with the IMF.

We join the appeal by international and inter-American human rights organizations for the State to swiftly investigate cases of deaths and disproportionate use of force, and establish permanent channels of dialogue to ensure the involvement of Indigenous and other potentially affected people in fiscal decisions. In this regard, the State must ensure that no regressive measure is adopted without careful consideration of its possible adverse impacts on human rights, that it ensures the involvement of those potentially affected and protects disadvantaged populations. Regressive austerity measures are contrary to human rights unless the State can prove that they are proportionate, non-discriminatory and strictly necessary, in the sense that any less detrimental alternatives have been exhausted.

The IMF’s responsibilities: an appeal

Finally, and on the occasion of its Annual Meetings in Washington DC, we appeal to the IMF to carefully evaluate its role in the region, in light of its human rights responsibilities, and adopt the following correctives as a minimum:

1. Refrain from exerting any undue influence that might restrict the fiscal space of States and go against democratic procedures and the human rights obligations that must govern the decision-making of sovereign States.

2. Establish the requirement to carry out human rights impact assessments of the conditions it imposes as part of its loans and other forms of assistance to States, with an emphasis on impacts on gender equality and on ethnic groups. These analyses should take into account the Guiding Principles on Economic Reforms and Human Rights adopted in 2018 by the Human Rights Council and apply rigorous and participatory methodologies.

3. Incorporate a human rights focus in the design of crisis responses, prioritizing policy alternatives that expand fiscal space, such as combatting tax evasion and avoidance, or strengthening tax collection via progressive direct taxation. In addition, it should reconsider, in line with its own research in this regard, the decision to continue supporting spending cuts and dismantling of State institutions, without carrying out more careful analyses of their relevance and necessity in specific contexts. Measures such as dismantling fuel subsidies must be sufficiently gauged and combined with prior compensatory mechanisms and broader clean energy transition policies to minimize the impact on the human rights of all sectors of the population, particularly those with lower incomes.

4. Consistently defend the interests and the capacities of low-income countries and their means of protecting fiscal space so they can guarantee and fulfill human rights, in the context of the reform of the international corporate taxation regime being moved forward in the OECD. 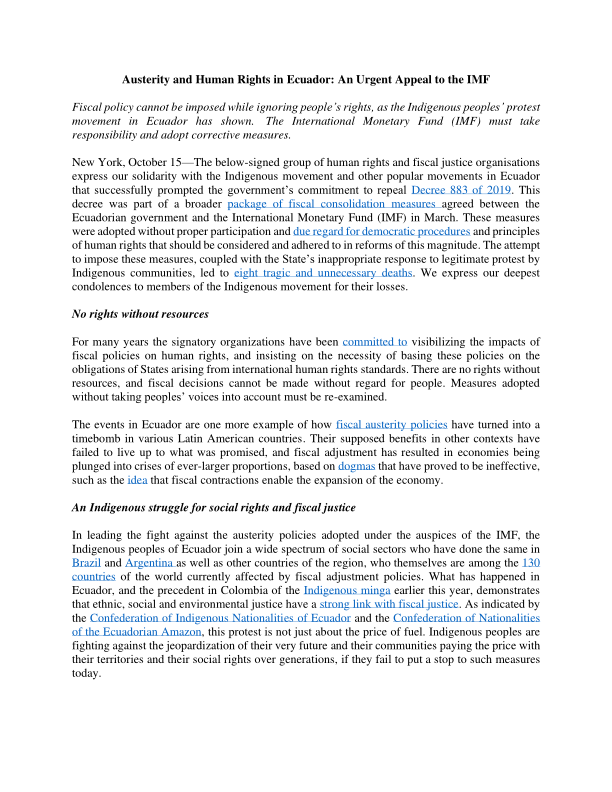