US Faces Rare International Scrutiny on Economic and Social Rights

It's rare that the United States' record on economic and social rights faces official international scrutiny. One such opportunity comes later this year, when the country must appear before the UN Human Rights Council, as part of its Universal Periodic Review (UPR) process.

In advance of that, CESR analyzed the rights to health, education, work, housing and an adequate standard of living in the United States. The results can be found in a just-published fact sheet, part of our "Visualizing Rights" series. We also filed an official submission to the UPR based on the data collected in the fact sheet, in coordination with U.S. human rights groups who have been working as a coalition in the run up to the UPR session in November 2010.

The fact sheet reveals (download PDF here) that despite being the world's wealthiest economy, the United States has one the poorest records of economic and social rights achievement of all high-income countries. Child poverty and infant mortality are far higher than in other comparable countries. Health and education disparities, particularly between ethnic groups, are extremely wide: African American women are almost four times more likely to die in childbirth than white women.

The data and graphs in this fact sheet also point to possible failures by the state to take all appropriate measures to guarantee the enjoyment of economic and social rights to everyone in the United States. Relatively low social spending suggests the government has not prioritized the realization of economic and social rights commensurate with the country's immense wealth.

The fact sheet argues that, in signing these treaties, the United States has indicated an intention to be bound by their provisions in the future, and not to violate their objectives and purpose pending ratification. The United States has ratified the International Convention on the Elimination of All Forms of Racial Discrimination, therefore it is obligated to ensure equal treatment of racial and ethnic minorities with regard to social and economic rights.

The United States' prominent role in drafting the Universal Declaration on Human Rights (UDHR) demonstrates its historical commitment to economic and social rights, which are included on an equal footing with civil and political rights in the declaration.

Prompt ratification of those treaties that have evolved from the UDHR would reaffirm that commitment and help make the promise of the UDHR a reality for all Americans. 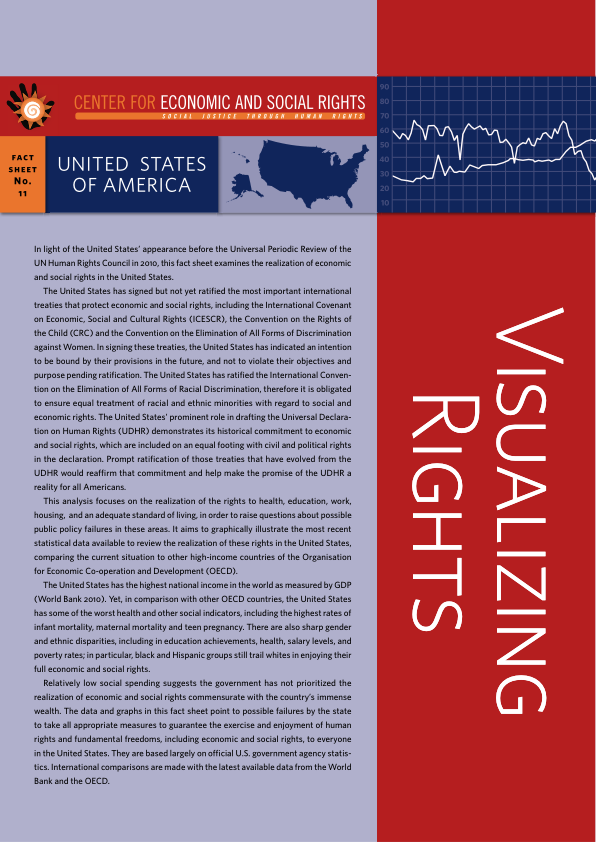