The income gap between whites and blacks more than quadrupled between 1984 and 2007, and a quarter of black families have no assets at all, according to the BBC. The story goes on to describe several community development programs aimed at providing financial literacy and budget training for African-American women in the state of South Carolina. The article interviews beneficiaries and founders of several initiatives to lift African American women, particularly mothers in single-parent families, out of poverty, to “break the cycle” of intergenerational poverty. 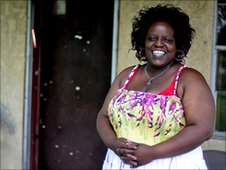 Kenya Williams is a 35-year-old single mother who has benefited from the help of the ALIVE community development corporation’s classes on basic book-keeping in Allendale County, where unemployment is double the national average. She earns $330 a week for her family of three girls and makes ends meet “week by week, paycheck to paycheck.” Natisha Boston, another single mother of three and a resident of North Charleston, has been helped by courses on credit-lending education and home-ownership programs at the Metanoia Community Development Corporation.

CESR’s 2010 fact sheet on the United States reveals alarming disparities in income levels, as well as access to health and education, among ethnic groups, with women facing compound effects. Among Asian, black, Hispanic/Latino and white groups, for example, black women experienced the highest working poor rates (income less than $21,756 for a family of four in 2009), at 11.6 percent, almost seven percent higher than their white female counterparts.  Furthermore, the southern states as a region also have some of the highest rates of poverty incidence in the country.

This figure, among others in the fact sheet, suggest that wages are too low to ensure an adequate standard of living and that discrimination exists in the enjoyment of economic and social rights in the United States. The country, despite being the world’s wealthiest economy, has one of the highest income inequalities and poorest records of economic and social rights achievement of all high-income countries. The United States, which has signed by not yet ratified the International Covenant on Economic, Social and Cultural Rights, will appear for the first time before the Universal Periodic Review of the UN Human Rights Council in November 2010.