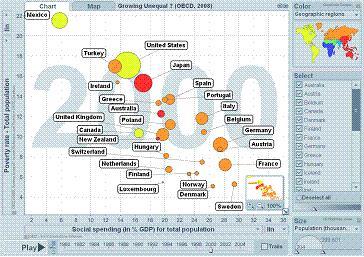 The Organisation for Economic Co-operation and Development (OECD) recently launched the report "Growing Unequal?", which highlights an increasing gap between rich and the poor in most OECD countries. Countries with a wide distribution of income tend to have more widespread income poverty. Social mobility was found to be lower in countries with high inequality, such as Italy, the United Kingdom and the United States, and higher in the Nordic countries where income is distributed more evenly.

The OECD comprises most countries in western and central Europe, North America, as well as Japan, Korea, Australia and New Zealand.

The report found that while pensioner poverty has decreased in the past two decades, child poverty has increased.  Children and young adults are now 25 percent more likely to be poor than the population as a whole. On average, one out of every eight child in an OECD country was living in poverty in 2005.

The report suggests using resources to address the changes in the labor market, working to increase employment and better educate the population.

For country-specific data, go here. To access the report, go here. To discover the interaction between income distribution and poverty rates over time in OECD countries, see the Gapminder graph to track each country's performance over time. It illustrates that incomes are more equally distributed where social spending is high.