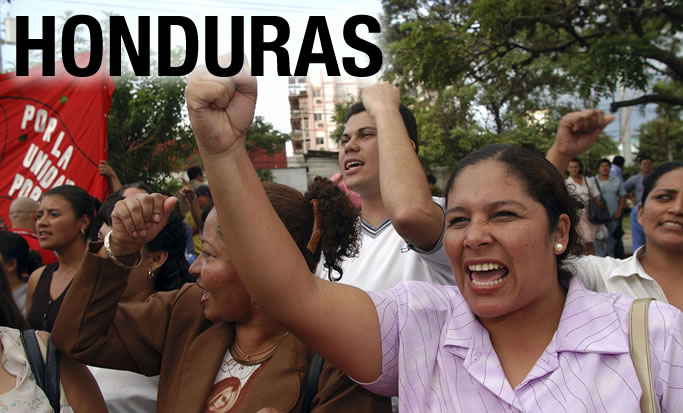 Gold mining in Honduras is carried out by mostly foreign companies using the cyanide heap-leaching method. This process of gold mining creates large open pits and releases a number of potentially dangerous toxins, including cyanide, into the environment. It also lowers the water table available to surrounding communities. In addition, communities of people have been relocated to accomodate gold mines in places like San Andres and San Martin. Community members were not provided with legal representation or assistance during negotiations, and were relocated to communities where the constructed homes lacked plots of land for families to grow crops or raise animals.

After being contacted by local activists, CESR organized a fact-finding mission to investigate human rights violations resulting from the rapid and unregulated expansion of the gold mining industry. The research focused on violations of people’s right to health and a healthy environment and the forced eviction of entire communities to accommodate new mines in El Porvenir and San Andres. The findings were published in The Price of Gold: Gold Mining & Human Rights Violations in Honduras, and presented by local activists in collaboration with CESR to the UN Committee on Economic, Social, and Cultural Rights in Geneva in April 2001.

Our intervention before the Committee was well received and shaped numerous specific findings and recommendations about how the Honduran government needs to improve its regulatory oversight in order to meet its human rights obligations.

CESR returned to Honduras in July 2001 to hold training workshops for affected communities on the use of human rights laws and mechanisms. At the workshops community activists were able to strategize on a number of issues including: holding the government accountable to general human rights principles and the Committee's specific recommendations, strengthening the communities’ voice on development decisions, negotiating with multinational companies, and developing a national grassroots movement to confront the effects of gold mining. CESR also met with human rights and environmental groups, as well as government agencies in charge of mining, to improve monitoring of the gold mining industry and understanding of the government's obligations under international human rights law, including the specific recommendations made by the UN Committee on Economic, Social and Cultural Rights.

The trainings served as the trigger for discussions between representatives of different Honduran organizations on how to develop a consolidated national grassroots movement around gold mining. Participating groups including ASONOG, a national conglomeration of municipal and local organizations on mining, CARITAS, a national Catholic organization, and Madre Tierra, a coalition of groups working in and around the capital city, asked CESR to work with them to develop strategies for building this national movement.

CESR again returned to Honduras in February 2002 to hold a second workshop on Human Rights and the Mining Industry. The workshop included participants from three communities in San Andres located adjacent to gold mines. It provided participants with an understanding of the basic principles of international human rights law and where it comes from; an opportunity to discuss mining and human rights; training in how to apply human rights standards to their local experience with gold mining; and education on the concluding observations of the Committee on Economic, Social and Cultural Rights from its April 2001 session on Honduras. The workshop included exercises on how to use human rights in local advocacy work and a video from Peru on the story of a community that experienced a mercury spill from mining activities.

CESR co-organized, with members of the Global Mining Campaign, a regional conference on Mining in Central America from February 8-10, 2002 in Tegucigalpa, Honduras. The conference included roughly 30 participants from communities affected by mining from Costa Rica, El Salvador, Honduras, Nicaragua and Panama. The conference featured presentations on the environmental and social conditions of areas affected by mining in each country, the development of NGO and community movements around mining in each country, and discussions on developing a regional campaign with strategies for implementation and collaboration with members of the Global Mining Campaign. CESR made a presentation at the conference on how human rights are being used in the growing movement in Honduras, as well as on CESR's report to the UN Committee on ESCR.

This conference was the first in a series of meetings to be organized by the Global Mining Campaign, the Mineral Policy Center and CESR to bring together communities affected by mining from throughout Latin America. In January 2003 a parallel conference was held in Chile for communities from South America. CESR and partners worked with organizers of this conference to organize a larger Latin American regional conference bringing Central and South American communities together. CESR also produced a series of educational materials on human rights and guides to the international and Inter-American human rights systems for dissemination to these communities and to the members of the Global Mining Campaign. We conducted a human rights review of a mining report prepared for mineral and mining development.

The Price of Gold: Gold Mining & Human Rights in Honduras

2001 report on a CESR investigation to the current operation of the gold mining industry in Honduras since the passage of the General...