Oil Spills You Never Heard Of 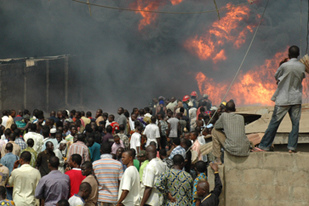 An oil pipeline explosion in Nigeria, May 15, 2008. This is a repeated occurence in the oil-rich west African nation, which has the continent's largest population. Photo: Pan-African News Wire

While the news about BP's Deepwater Horizon platform blowout in the Gulf of Mexico is on a 24-hour news feed, it took a long boat ride and some serious slogging by John Vidal of The Observer to uncover a bigger and far deadlier oil spill near the village of Otuegwe in Nigeria’s Niger Delta, as Foreign Policy in Focus blogger Conn Hallinan notes this week.

The culprits in Nigeria are Shell and Exxon Mobil, whose 40-year old pipelines break with distressing regularity, pouring oil into the locals’ fishing grounds and drinking water. The Delta supports 606 oil fields that supply close to 40 percent of U.S. oil imports, Hallinan writes.

Just last month, an Exxon Mobil pipeline ruptured in the state of Akwa Ibom, dumping more than a million gallons into the Delta before it was patched. According to Ben Ikari, a writer and member of the local Ogoni people, “This kind of thing happens all the time in the Delta…the oil companies just ignore it. The lawmakers do not care, and people must live with the pollution daily. The situation is worse than it was 30 years ago.”

As Fred Grimm, writing in the Miami Herald, points out, the Nigerian government admits that 2,000 major oil spills, some years old, still await cleanup. Nigeria has tough-sounding environmental laws, but little enforcement by a government that has been compromised by big-oil money.

Nigerian government figures show there have been more than 9000 spills between 1970 and 2000.

Just how bad things are is not clear, because the oil companies and the Nigerian government will not make the figures public. But independent investigators estimate that over the past four decades the amount of oil released into the Delta adds up to 50 Exxon Valdez spills, or 550 million gallons.  According to the most recent government figures, up to June 3, Deepwater Horizon had pumped between 24 to 51 million gallons into the Gulf of Mexico.

Although CESR is not currently working in Nigeria, in March 1996, CESR and Social and Economic Rights Action Center (SERAC), a Nigeria-based human rights organization jointly submitted a legal communication to the African Commission on Human and Peoples' Rights regarding economic and social rights violations in Nigeria. The petition broke new ground at the Commission, which had yet to consider any of the economic and social guarantees contained in the African Charter on Human and Peoples' Rights.

The petition focused on violations of the rights to health, housing and food in Nigeria's oil-producing region and was intended to: 1) draw attention to the massive environmental and social problems underlying the execution of Ken Saro Wiwa and other local activists; 2) broaden the range of human rights concerns considered by the Commission; and 3) provide a model communication for other human rights and social justice advocates in Africa.

Six years later the African Commission found the former military government of Nigeria guilty of economic, social and cultural rights violations against the Ogoni people in connection with state violence and abuses around oil development in the Niger Delta. The Commission also made recommendations for the current government to take remedial action for those violations.