For a Recovery That Changes a Broken System: Let’s #FightInequality with Rights

English
This week, communities around the world are raising their voices to demand a “People’s Recovery” to the pandemic. Throughout the week, rallies, petitions, stunts, music, and dance are taking place in around 30 countries—from Kenya to the Philippines, South Africa to Mexico, India to Chile. Many of these activities have moved online. While the pandemic has changed methods, the message remains the same. It’s a message of both resistance and hope: people on the frontlines of inequality have the solutions for creating system change. As part of the Fight Inequality Alliance, the Center for Economic and Social Rights is proud to stand in solidarity with these activists.
The Global Protest is timed to coincide with the annual meeting of the World Economic Forum. This year, it too has gone online. The program marks the launch of the Forum’s Initiative to promote a “Great Reset” of capitalism. But, as we and others argue on Spotlight on Sustainable Development 2020, pushing the reset button “just restarts the game”. It doesn’t change the rules of the game or—more importantly—change the game itself. The reset button simply “reboots the (old) system”. Not only has this system failed to prevent the cascading crises the world currently faces, it has in fact caused them. 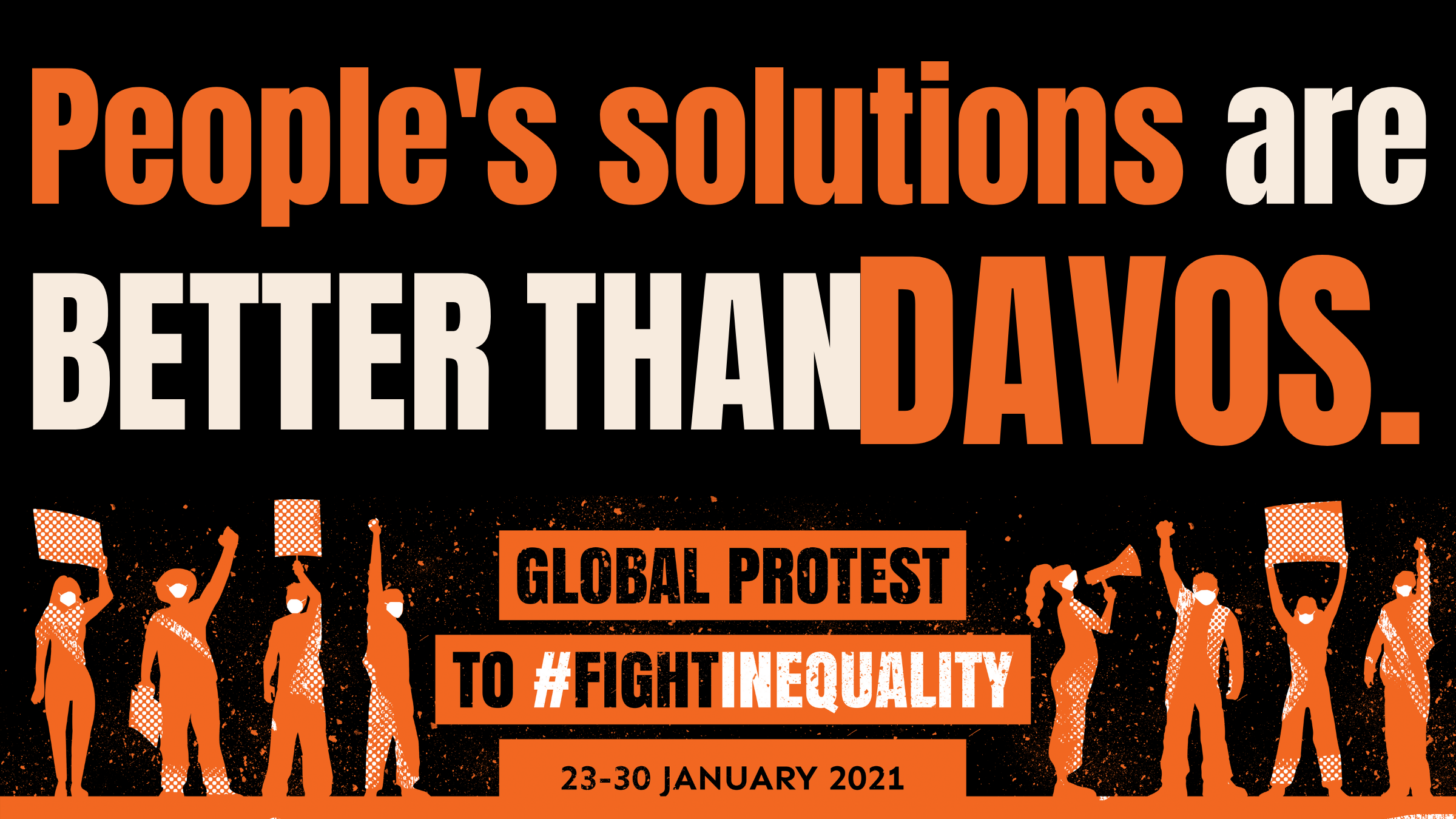 The solutions we need will not come from those benefiting from the status quo. The Inequality Virus, published by Oxfam on Monday, calculates that for the world’s poorest people, recovery from the worst economic crisis in 90 years could take over a decade. Meanwhile, billionaire fortunes returned to their pre-pandemic highs in just nine months. The world’s ten richest men have seen their combined wealth increase by a jaw-dropping half a trillion dollars since the pandemic began.
COVID-19 has "supercharged" inequality— within and between countries. It’s proving to be a pre-existing condition as deadly as COVID-19 itself. The racism and sexism built into our current economic model have meant that the pandemic’s heaviest toll has fallen on people of color and women. The “me-first” approach to vaccines—borrowing the words of the head of the World Health Organization—is just one example. Dr. Tedros warns that this approach pushes up prices and encourages hoarding. It puts the world “on the brink of a catastrophic moral failure—and the price of this failure will be paid with lives and livelihoods in the world's poorest countries."
The demands set out in the People's Recovery campaign center on the protections and entitlements that must be guaranteed to all of us, so we can recover from the pandemic. These include:
They also identify concrete actions that governments can take—individually and collectively—to make these guarantees a reality. These include:
In short, these demands are for a system that treats people "as humans who have the right to a life of dignity". Another way to describe this system? A rights-based economy. This is a concept that we are exploring more and more as a central plank of our strategy. It’s also one that is gaining traction across the human rights and economic justice communities.
Human rights give us a holistic and widely agreed language for understanding the conditions needed to secure people’s dignity and wellbeing. Rights are understood to be interrelated and indivisible. In other words, they depend on each other. Understanding economic inequality as a violation of people’s rights reveals the ways it is woven together with racial and gender inequalities.
Importantly, human rights come with obligations. By signing up to international treaties, enshrining rights in their constitutions, and passing legislation, governments around the world have agreed to these obligations. These obligations demand they play an active role in guiding the economy—including action to redistribute resources, remedy systemic racial and gender inequalities, and rebalance power in our economies — both nationally and globally.
These obligations are being routinely flouted by governments because they're able to avoid accountability for them. Popular support for a new system is crucial to ending this. To achieve that, we need to translate human rights standards and principles into useful tools for activists to imagine how our economies could be reshaped. We're committed to working with those at the frontlines of inequality to do just that.